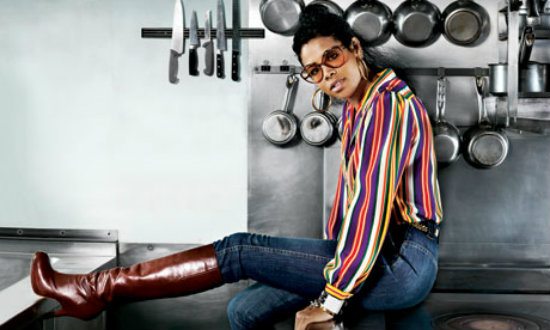 Over the past couple of years, Kelis has been hard at work, cooking up a name for herself outside of the boundaries of music -- literally. Since graduating from Le Cordon Bleu in 2008, she has hosted several cooking specials on the Cooking Channel, in addition to releasing a culinary-inspired album last year titled FOOD. After previously announcing several years ago that she was launching her own line of sauces called "Feast," she finally makes good on her word. Releasing under the new name, "Bounty & Full," the line will be available for online orders beginning March 1st and is set to feature such mouth-watering flavors as Wild-Cherry BBQ Infused with Espresso and Ginger Sesame Glaze.

According to the singer and foodie, she graduated knowing that she was meant to be a saucier. "I fell in love wit sauces because they define who we are as people -- culture, ethnicity [and] character," she says on Bounty & Full's website. In addition to featuring her sauces, the website also has a recipe section, complete with her personal recipes for everything ranging from Jerk Ribs to Coconut Custard Pie.

If you want to keep up with when the line of specialty sauces will hit the market, then be sure to follow Bounty & Full's Instagram page, where they are doing a day-by-day countdown to the big launch.