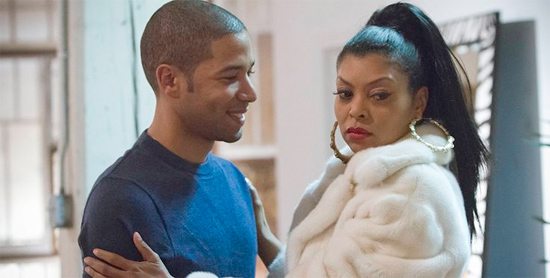 We’re introduced to Lucious Lyon, the head of Empire Entertainment, in his element -- the studio -- but we soon see that he has more on his mind than the singer in the booth. Recently diagnosed with ALS and only given three years to live, he needs to groom one of his three sons to take over the family business. Youngest son, Hakeem Lyon, is a struggle rapper trying to become the next big thing; middle son, Jamal Lyon, is a singer and musician whose family is struggling with his sexuality, which has hampered his career thus far; and oldest son, Andre Lyon, is the serious and conniving, Ivy league-educated CFO of Empire Entertainment. As Empire prepares to file an IPO, Lucious’ ex-wife, Cookie Lyon, gets released from prison after a 17 year bid and she’s coming home to get her piece of the pie that is Empire, the company that she helped to build with drug money.

Cookie whirls back into her sons’ lives like a sassy hurricane. Her first stop is Jamal’s place that he shares with his lover Michael. Although Jamal is welcoming (despite Cookie and her hilarious yet politically incorrect comments), Hakeem isn’t up for a family reunion and his bad attitude when she tries to reconnect with him earns him a beatdown with a broomstick. Her relationship with Andre isn’t as volatile, but he has his own agenda as he talks her into managing Jamal in the hopes of making him a star to spite Lucious who can’t accept the fact that he’s a homosexual.

Cookie and Lucious clash over what she feels she’s owed -- half of the company -- and he explains that he can’t give that to her, but he does offer her a high-paying job at Empire Entertainment as a consolation. She doesn’t accept the offer outright, but she does counter with a request to sign Jamal and threatens to air out the truth about Empire’s drug-funded origins. Lucious begrudgingly agrees to release Jamal to Cookie, and she signs a deal to keep quiet.

Both Jamal and Hakeem are seen performing, and it’s clear that Hakeem is the weakest link. Jamal hooks him up with a much better track than the one he was working with, but Lucious downplays his involvement and musical genius, which lights a fire under Jamal to take his mother on as his manager, embrace who he is and prove his father wrong.

Lucious’ ex-wife isn’t the only one who wants what’s theirs from Empire. His long-time friend and driver, Bunky, confronts Lucious and demands three million in exchange for his silence about his checkered past littered with four drug dealers who he’s killed. Lucious doesn’t take too kindly at Bunky pulling a gun on him much less his ultimatum, so he has him followed to dig up some dirt and finds out that he hasn’t exactly been loyal. In one final confrontation, Bunky gets dealt with like those drug dealers when Lucious shoots him in the face and he falls dead into a river. -- Butta