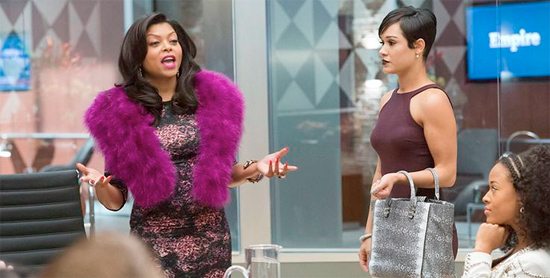 After seeing her impeccable ear in action, Tianna seeks out Cookie to help her craft her sound, which is music to Cookie’s ears as she usurps control of the young artist — much to Anika's chagrin. Lucious, in the meantime, is focusing on poaching top rapper Titan from rival label Creedmor Entertainment. Over in what’s supposed to be Bushwick (which in real life is a rapidly gentrifying area of Brooklyn but here is represented as the dingy second circle of hell), Jamal and his boyfriend are adjusting to life without the financial support of Lucious. Jamal is also going through a bit of writer’s block, putting him behind in the competition with Hakeem.

At the company, the investigation into Bunky’s death is heating up and Lucious finds himself in the hot seat until Andre, out of habit, provides him with an alibi (keep this tidbit in mind, it’ll come back later). Elswhere, “Takeem” (gag) is heating up enough that they have a dedicated online following, and Anika arranges for the new couple to play during the Teen Choice Awards nomination special (because in the world of Empire people apparently care about the Teen Choice Awards). But Hakeem’s sloppy love affair with older woman Camilla (who is, we must remind you, played by supermodel Naomi Campbell — remember, this is bizarro world) gets found out when Tianna waltzes into his apartment with the key the young dumbass gave her and then storms out after seeing him attempting to work out his mommy issues with Camilla in a bathtub. Still, despite Hakeem being a petulant brat and the fact that they haven’t rehearsed a damn thing, their Teen Choice performance goes off without a hitch.

After a suggestion from Hakeem, Jamal goes all Stomp on us to find inspiration for his next song, “Keep Your Money,” a not-too thinly veiled directive aimed at Lucious, who still refuses to give Jamal his due because he can’t deal with his sexuality. Speaking of Lucious, after a visit at Leviticus from Billy Baretti, sleazily played by Judd Nelson, the owner of Creedmor Entertainment and once upon a time Lucious’ manager, and some help from Cookie, Lucious finally signs Titan to a lucrative deal with Empire Entertainment. After celebrating the victory in a rare civil moment between him and Cookie, Lucious admits that they, like peanut butter and jelly, ham and burger and Peaches and Herb, work pretty well together when they aren’t trying to rip out each other’s throats. They share a smile and some funny banter before Cookie, finally up to the current decade with her attire, saunters out of the office with an “I got that good good” smirk on her face. -- D-Money