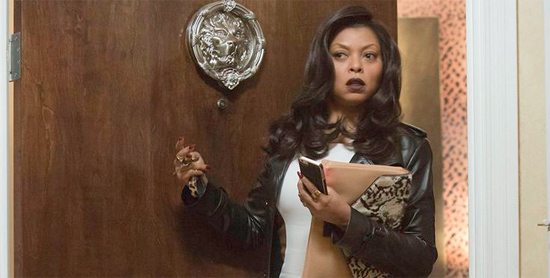 Fresh from a red carpet appearance, Hakeem drops Tianna off at her crib, where a lady friend is waiting for her with some hot kisses and hotter caresses. Hakeem, if that’s your girlfriend, she wasn’t last night.

Across town at the Lyon compound, Lucious has a romantic evening planned for Anika and he invites Anthony Hamilton to the house to play her a song. While Hamilton croons “The Point Of It All” on the piano, Lucious drops to one knee and proposes to Boo Boo Kitty, who is quite enamored with her ginormous 18-carat diamond.

Jamal and Cookie find themselves somewhere in the hood at a seedy studio where he wants to record. Cookie isn’t feeling the surroundings, but she goes with the flow. Another thing she isn’t checking for are the feds checking up on her when she leaves the studio. Agent Carter assures her that it’s for her protection.

Rhonda invites Andre down to a photo shoot where Tianna and her “friend” are seen getting quite cozy with each other between racks of clothing. Shady Rhonda takes videos of the couple with the intent of sending them to the gossip blogs in an effort to ruin Hakeem at Andre’s request.

While those two are plotting, Cookie is testifying to a grand jury about a murder that she witnessed back when she was running the streets. She fingers drug kingpin Frank Gathers as the shooter. It’s revealed in court that the dead man was an FBI agent, and Cookie hits the roof when she hooks back up with Agent Carter when she realizes that she's a "dead bitch walking." Scared for her life, Cookie is convinced that someone is in fact trying to kill her when she finds a single red rose on her doorstep. Shook to her core, she decides to take a taxicab ride to Philly to try to get some answers from her sister and their friend Jamel, played by comedian DeRay Davis, who will handle things.

Hakeem introduces us to the most annoying earworm since “Macarena” with his song “Drip Drop.” Thankfully his flow has gotten marginally better, but it's an annoying song nonetheless. A big budget music video is in the works with mad video vixens and Tianna in the mix. Then Andre and Rhonda put their dastardly plan in motion, and all hell breaks loose when footage of Tianna and her girlfriend hits the net and goes viral. Hakeem finds out and flips his flattop before confronting Tianna who reminds him that he has a side bae, too.

Not content with just ruining Hakeem's little relationship, Andre plans to bust up Jamal's studio session by casually mentioning around some of Hakeem's miscreant friends that there may be some big ticket items worth stealing there. Sure enough they go to studio and try to rob Jamal and his musicians and end up shooting one of them. The studio owner draws a bigger gun, and the two wannabe thieves run like roaches.

Anika's parents are introduced and their contentious relationship with Lucious is revealed. Neither her mother or physician father are here for his shenanigans, but her daddy does come around and decides to hook Lucious up with a doctor friend of his for some ALS treatment after he finds out that Anika stands to become a billionaire after Lucious dies and leaves his fortune to her in his will.

Lucious not only convinces Anika's father to get on his side, but he talks some nonsense into Hakeem to not let Tianna's girlfriend derail his relationship with her and to use the moment to fuel interest in his new video.

Jamal's studio session also gets back on track with some up-and-coming musicians who come in to save the day and play on the record. "Keep Your Money" is signed, sealed and delivert. Jamal has some unfinished business to handle with Hakeem, though, who he believes was behind the drama at the studio. He meets Hakeem at his crib and they get into a fight of sorts --  Jamal hit Hakeem and Hakeem hit the floor.

This busy day ends with Lucious popping up at Cookie's crib unannounced. He asks her if she received the rose that he left on her doorstep as an anniversary gift earlier in the day, and it clicks to her that it wasn't left behind by someone out to kill her. Unfortunately, by that time it's too late to stop Jamel and his crew from handling things in the deadliest way possible. -- Butta