Missy Elliott Put Her Thing Down, Flipped It & Reversed It At Super Bowl XLIX 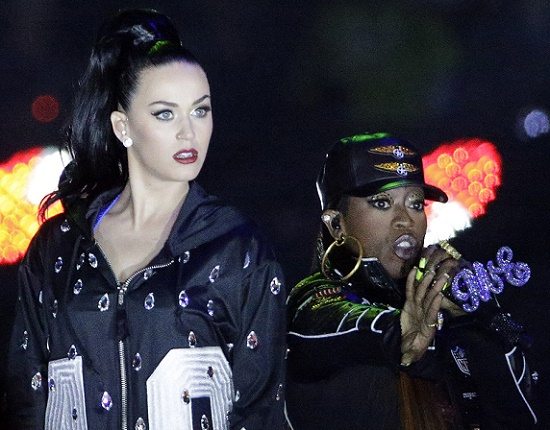 Last night's Super Bowl was exhilarating to say the least. But for those who were less interested in whether or not the Seahawks or the Patriots took home the Lombardi trophy, the big attraction was the 13-minute halftime show headlined by quirky pop princess Katy Perry. While her set was definitely action packed with lions and dancing muppets and Lenny Kravitz (oh my!), it wasn't nearly as exciting as Super Bowl halftime shows past. That is, until her not-so-secret guest took the stage.

The one and only Missy Elliott bounded onto center field to the strains of her 2001 hit "Get Ur Freak On" with an entire troupe of dancers behind her. She did an energetic run through of the party-starter, with Katy playing her hype man, before hitting the audience with "Work It" and "Lose Control," wiggling her svelte frame and tossing her super long weave back and forth in the Arizona wind.

Though Misdemeanor was only on stage for a few short minutes, it seemed as if she was the actual halftime act and Katy was just warming up the crowd. In fact, while the Super Bowl show usually gives the headlining act a boost in sales, the singles that Missy performed all found themselves suddenly in the top 20 on the iTunes charts. So, though the Patriots were the ones to take the trophy, it was ultimately Missy who won the game. Check out the full halftime show below. If you'd rather just get to the good part, we have Missy's glorious section of halftime separated for your viewing pleasure as well.