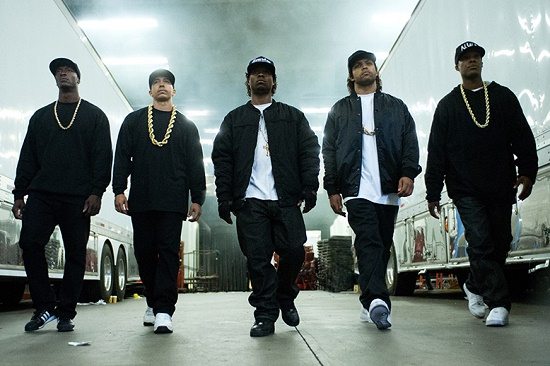 While we knew that a biopic about N.W.A. wouldn't be without its share of controversial moments, the official trailer for the upcoming film shows that we'll see parts of the gangsta rap pioneering group's story that we might've not known about.

But before we get to the film's footage, the trailer gives us an intro from founding members and the film's producers Dr. Dre and Ice Cube (which, if you've been keeping up with the news, served as the backdrop for Suge Knight's recent murder charge). The reconciled friends take a tour around Compton, showing us some of their neighborhood spots and running into fellow famous Compton natives Game and Kendrick Lamar, who discuss what the group means to them.

The red band trailer itself shows a bit more than we saw in the previous leaked trailer from one of Cube's shows. While we get the expected trappings of rap star life (liquor, money, naked women), we also get a peek into the drama and politics that surrounded the group, including confrontations with law enforcement over their song "F**k Tha Police," family strife and the Rodney King beating and the riots that followed.

Being that this is a red band trailer, there are some moments featured that are definitely NSFW, so you might want to watch this one on your phone or while your nosy co-workers aren't around. Check out the trailer below, and look for the film to arrive in theaters this August.