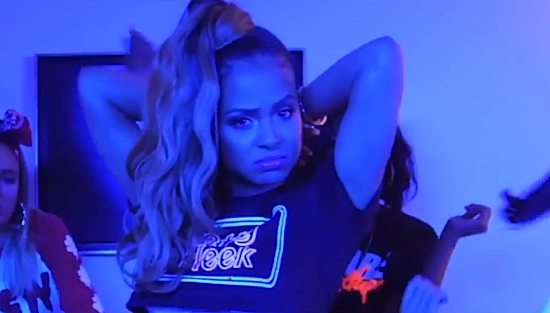 Tina Turn Up — better known to all of us as Christina Milian — has dropped her latest single, “We Ain’t Worried,” but she’s also gifted us with a video of her newly available track.

The minimal drip-drop of the tune's melody is a far cry from the caffeinated beat that filled out her 2001 debut, "AM to PM." In fact, those unaware that there's a singer behind the song might mistake it for a rap tune, with Milian's flow drizzling itself over percolating pops as she drops verses in the A-follows-B fashion the kids like these days ("Disappear Like David Blaine," "I was your biggest catch / But you’ve gone fishin’").

And, in the style of Beyoncé's "7/11," Milian and her homegirls hang out at home, rocking some duds from Christina's clothing line and pulling out choreographed steps. Surfboard.

If girls just want to have fun and prove just how worried they aren't, then "We Ain't Worried" represents that well and keeps things unexplainably addictive in the process. But what we'd love to find out is if this, and the recently premiered "Rebel," are part of a bigger project.