Did You ‘Catch’ Liv Warfield on ‘Jimmy Kimmel Live!’? 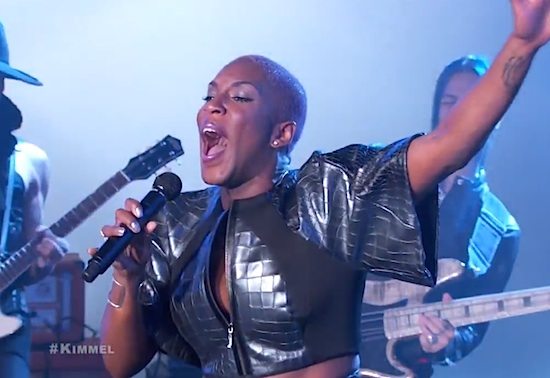 In the event that you were so spent after last Thursday's How To Get Away With Murder season finale and needed to go lay down, you may have missed Jimmy Kimmel Live!, which came on ABC after the local news. Newly minted Oscar winner Common was on that night to chat it up with Jimmy Kimmel, but he also welcomed Liv Warfield to his stage for a live performance.

Liv showed up and showed out with her band Blackbird and the NPG Hornz supporting her. The singer, who matched her lipstick to her hair color -- which was no small feat considering both were purple -- made quite an entrance. She sprinted through the audience with the Hornz hot on her trail then lit into "Catch Me If You Can." Liv shook her shimmy and rocked out as she is known to do, all the while sounding amazing and putting on another tight show. And that's just what was seen on air.

In addition to "Catch Me If You Can," Liv and her crew performed an online exclusive with a raucous live version of "The Unexpected." The title cut from her last album came alive on stage. It's too bad that Kimmel's television audience didn't get to witness this perfection, too, but thankfully both performances are online for fans' viewing pleasure.