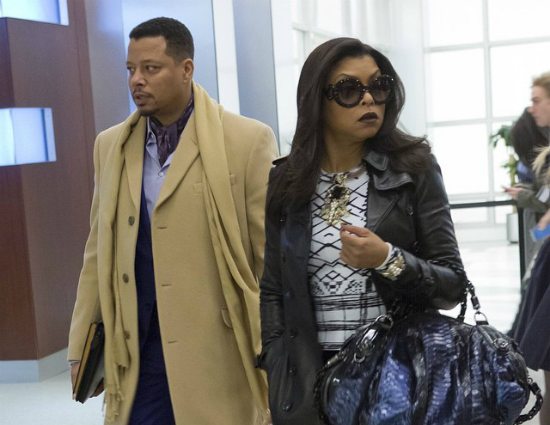 Last week's episode of Empire was packed to the gills with drama. But, while the first half of the hour was all about the Lyons finding their way back to family, the latter half blew all those notions up with dynamite, culminating in a white party that saw Jamal coming out, Cookie reading everybody like her favorite novel and a confrontation between Lucious and Andre that left the oldest of the Lyon sons feeling a bit suicidal. But perhaps the most crucial moment was the brief glimpse we got of Anika walking into Billy Beretti's offices. We all know nothing good can come of that.

Episode 9: "Unto The Breach"

The episode starts nicely enough as Lucious and Anika sit with a wedding planner discussing their upcoming nuptials, with Anika commenting that George (as in Clooney) and Amal had doves (OK, girl). But before they can even decide what flavor of cake they want, Cookie and her assistant Porsha bust into the mansion to blow up Anika's spot like little sisters. "She workin' wit Beretti," Cookie the Boss says accusingly. She then gives Boo Boo Kitty a chance to explain herself, but we can tell Anika's lying because when she's replying she st-st-st-stutters stutters. As Cookie and Porsha help her to gather her things by throwing her clothes off the balcony and outta the front door, Lucious chases after her to find out what's going on and offer apologies at first and, when those aren't working, threats later. Shockingly, neither of those things work and Anika hops into an SUV with Beretti.

Next we see Jamal pulling an "Untitled" in a new video. While him channeling his inner D'Angelo is probably meant to get us in the mood, it comes off more corny than sexy (and the "Empire" sign flashing in the background sure doesn't help). But it's enough to get Mally Mal and Ryan, who are watching the clip, pawing at each other. Apparently, they're a full-fledged thing now. Unfortunately their make-out session is cut short by Porsha, who tells Jamal to put his chest up as he's got Empire business to tend to.

At the office, everybody's on red alert. Anika is not only in cahoots with Beretti, she's also wooing Empire's roster away with promises of better deals and Kanye West features (say it isn't so, Veronika!). That leaves Lucious scrambling to retain his hitmakers. But, even with his livelihood on the line, his homophobia is still unchecked. He blames part of the label's departures on Jamal's coming out, even as his middle son is pulling more than his weight in making sure artists stay put, more than can be said of petulant Hakeem or crazy-ass Andre.

Speaking of Dre, son number one is officially off his meds, having flushed them all down the toilet. He shows up to the offices with a suitcase full of money and ready to offer hookers and drugs if need be (because some things never change in the music biz). Others have different ideas, though, as Cookie goes to Ghetto Ass Studios -- aka where Jamal recorded "Keep Your Money" -- to woo star rapper Royalty to the fold, Jamal heads to meet Ryan and lure chanteuse Delphine (guest star Estelle) and Lucious, Andre and Hakeem go after Travie Wild.

Cookie's approach to getting Royalty is a little unconventional, as she challenges Beretti's people (who, even in 2015, can't seem to grasp that a woman can stomp as hard as the big boys) to a drinking contest, with the last one standing getting to lay claim on the rapper. Cookie, with her 17-year stay in the pen drinking pruno strengthening her liver, drinks every single guy under the table, ensuring that Royalty stays with Empire. As she stumbles out of the studio, barely able to stand, let alone defend herself, a thug tries to get her for her purse. Luckily head of security Malcolm (Hey, Derek Luke, hey!) was worried about Cookie's safety and meets the would-be jacker with a one-two punch. Cookie is grateful, of course, and drunkenly (and hilariously) invites him to nibble on her cookies in return. But because Malcolm values his job (and, where Lucious is concerned, his life), he declines the offer.

Jamal, meanwhile, works on getting Delphine by stepping into the booth with her to do a duet. The song, "Conqueror," of course is a familiar one for anyone who's listened to Estelle's new album, True Romance. After having a smiley good time in the studio, Jamal has convinced Delphine to meet with Lucious and possibly sign with Empire Entertainment. Too bad Lucious is still being a homophobic dumbass and is ignoring his calls. Instead, A Pimp Named Slickback is busy trying to woo back Travie, who seems to be none too pressed with about re-signing with the label. But Andre, who's growing more manic by the minute, saves the day by talking good business with Travie.