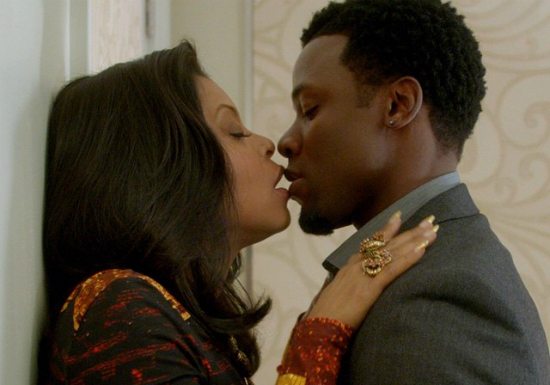 When we last left off with Empire, Andre was playing basketball with no net in the Empire Entertainment conference room before getting carted off to a mental hospital for a 72-hour hold. Andre's psychotic break is just one of many crazy and deranged things to happen to the Lyon family this season, and the madness didn't stop there. The action popped off this week like a fresh batch of Orville Redenbacher popcorn, and it was a non-stop roller coaster ride of emotions and shocking revelations.

The Lyon family are gathered together at the Holden-Jones Clinic where Andre is being treated for his bi-polar disorder. Well, everyone in the Lyon family with the exception of patriarch Lucious, who neglected to show up and sends a message that he'll catch Dre on the flip side the next day when he's released and comes to the house to sign the IPO. Cookie holds things down but is visibly shaken as she sees her eldest son grappling with his issues. Andre seems unaffected that his father isn't there, but it's a well-played facade as he flashes back to a few years prior to a party at the Lyon compound.

In the flashback, Lucious tickles the ivories and accompanies the singer Angie (played by Mary J. Blige) on the song "Shake Down." Everyone in attendance is jamming, and we see young Jamal with a head full of curly hair, Bunky when he was still breathing and even Jamla's wifey Olivia in a skanky little black dress. We're brought back to present day, and Andre's psychiatrist introduces his music therapist Michelle White (with Jennifer Hudson in the role) to everyone. Cookie scoffs at the concept of a music therapist, but Michelle nicely shuts her down by explaining how music therapy can help with bi-polar symptoms. Our girl is hearing her talk but she's not really listening; she still doesn't know exactly what this bi-polar thing is all about and blames Rhonda for what's happened to Dre because he's going through "white people problems." Rhonda shuts her down, too, and tells Cookie that it isn't a white thing before Andre finally speaks up to give his mother some more insight into his first psychotic break that happened during his junior year of college at Penn. The flashback scene continues, and Andre busts up into the party unannounced with bags of expensive Christmas gifts for his family who all see that something is clearly wrong with him because it is nowhere near the holiday season. Cookie is shook at this revelation, and she tearfully apologizes to Andre for not being there for him when she did her bid before she leaves with Hakeem and Jamal.

Lucious is busy with Vernon at the Empire Entertainment offices preparing for the IPO. Vernon questions why Lucious is dividing up the shares and giving Cookie an equal amount as his sons. Lucious Fiasco tells Vernon that it's his way of placating Cookie when he asks her to sign a pre-nup. Wait. WHAT? Now that he's bounced Boo Boo Kitty to the curb, Lucious has made his mind up to remarry Cookie and spend the rest of his life with her because he's all about keeping his family together. Vernon pulls his card and asks him if that's the case then why hasn't he visited Andre in the hospital. Lucious tells Vernon that he doesn't want to see his son in those conditions and that he'll holla at him at the crib when he comes to sign over his stock. He also has this grand vision in his head that he, Cookie and Jamal's daughter Lola will live together and he'll have a second chance to make things right. But Andre's the one in the mental hospital. OK, then.

Vernon is happy to hear Lucious happy, and he's ready for them to take things to the next level with this Empire IPO. He gives Lucious dap but is greeted with a side-eye instead of a pound and is left hanging like the clothes at a dry cleaner. Lucious checks Vernon and lets him know that HE built Empire by himself. Vern sees that his frenemy is in his feelings about the takeover that he and Andre tried to execute, and he's right. Instead of ruffling anymore of Lucious' feathers, Vernon decides to chill and play along with Lucious' delusions of grandeur.

Cookie is busy educating herself on bi-polar disorder when she gets a visitor to her office. She perks up when Malcolm, once again played with smoldering intensity by Derek Luke, peeks his head inside her door and politely asks to come in. He begins telling her that he's violated his personal code of conduct and has fallen for his commander's wife. Oh? Say word? Cookie sits up straight to hear this confession and stops Malcolm before he exits her office to hear more. That's when Malcolm confesses that he can't stop thinking about her (and her cookies). Aroused by that revelation -- because just look at the man in all his sexy glory -- Cookie steps to Malcolm, plants a passionate kiss on his lips and they kiss like they're in a romance novel. FINALLY!

Over in the studio, Jamal sings the sweet song "Lola" about his baby girl as scenes flash of the two of them enjoying happy times and bonding. Jamal is on top of the world, but his new boo Ryan is more like a wet blanket. Ryan asks Jamal if he meant all the lyrics and Jamal confides in him that he is in fact thinking of taking over Lola's care from Lucious now that Anika is gone. Unfortunately, Ryan aint bout that daddy life, and Jamal informs him that he's going to take care of his seed regardless of his feelings.

Olivia pops back up in present day in Hoboken, New Jersey getting ready to board a bus to Tampa, Florida. Guest star Raven-Symoné dials back the ratchet considerably and looks rather cool, calm and collected before her abusive boyfriend Reg rolls up on her. Olivia's jig is up and she's not going anywhere. He calls himself her daddy and asks where Lola is. Reg leads her away from the bus (and her luggage -- where they do that at?) and says that they're gonna go find her.

Back on Fantasy Island, aka Hakeem's spot, where Naomi Campbell is still playing Camilla and we're still not buying it, she's taking photos of him in some fresh gear that she's styled him in. He's not feeling the shoot and Camilla tries to motivate him. She encourages Hakeem to keep his eyes on the Empire prize and that's just the attitude adjustment that he needs -- in addition to some lip action from Camilla. Their little photo shoot continues, and she proclaims that she is guiding his career now and together they'll be the next Anthony and Cleopatra. More like the next bye and Felicia.

Rhonda returns to the Holden-Jones Clinic to scoop Andre up to go to the Lyon compound to sign over his shares. Andre isn't having that, however, and he tells her to go without him. He's already left paperwork at the front desk for her to the house on her way out. Ouch.

In a more tender moment, back at the Lyon house Jamal is tucking little Lola in. Like most little ones, she's fighting sleep and tells her daddy that the scary birds are coming to get her just like they hurt her mommy. Jamal thinks that it's just her imagination running wild and assures Lola that he's there to protect her and mentions that he wants her to move in with him.

Downstairs, Lucious offers Cookie the freshly vacated position of the Head of A&R at Empire Records, and she's unimpressed. What Cookie really wants is for him to step up, to be a better father and to also allow her to produce his tribute concert under the Cookie Lyon Presents banner. Lucious loves the sound of he and Cookie being together again. Before Cookie can get to the bottom of what Lucious is getting at, Jamal interrupts them and needs to speak with his father.

It's business as usual at Leviticus, and the club is poppin'. And who pops up at the bar but Olivia and Reg. Vernon is also there alone in the VIP section. But that's not all that Vernon is up to, because we soon see that he is in love with the coco and he got it on the low-low. He takes a hit but quickly puts his narcotic away when he sees Olivia and her friend coming to speak with him. Vernon isn't here for his uninvited guests -- especially not Reg -- but he hears Olivia out and finds out that they're looking for Lola and need to know where she is for a little family reunion.

Lola meanwhile is snug as a bug in a rug at the Lyon house, where Jamal has a sit down with Lucious and tells him that he's decided to take her to live with him. (In fake-Bushwick? No, sir.) Lucious thinks not and vetoes that idea, but Jamal takes him to task. That's when the flashback scene picks up once again, and we see Andre being taken away the first time that he's committed. Lucious is told by a doctor that Andre has a serious mental illness, and he flies off the handle refusing to accept the diagnosis. He swears everyone to secrecy and keeps it moving. Denial is more than a river.