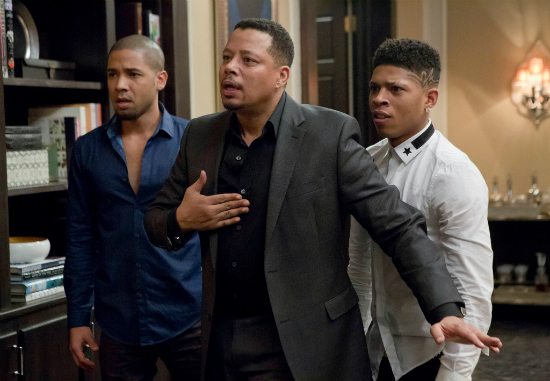 While Lucious and Jamal chit chat, Cookie is in the dining room calling her new boo Malcolm, who is tracking her by the GPS on her phone so he knows where she is at all times. She doesn't know that, however, so when he tells her exactly where she is in the house she thinks he's got a camera watching her and she gets ready to really give him a peep show. He fesses up and she pulls herself together, but she does let him know that she's not wearing any panties and he tells her that he has a pair of handcuffs with her name on them. Hot damn! Before the convo gets anymore steamy between these two lustbirds, here comes Lucious strutting into the room and killing their vibe. Cookie quickly cleans her conversation up and acts like she was on the phone with her sister Carol who needed her help frying chicken. She tried it, and Lucious somehow believes her.

Lucious tells Cookie about his meeting with Jamal and his plan to keep Lola for them to raise. Cookie asks him to clarify what he's talking about, but before he gets the opportunity in walks Hakeem and Camilla in coordinating Mommy and Me outfits. Hak lets his parents know that he has a new song with his cougar bae on that he wants them to hear. Cookie clowns Yoko Ono on her come up but agrees to chill for Hakeem's sake. Everyone segues into the living room where Hakeem debuts his fresh new track  "Nothing But a Number" for them. The song is all about his May-December romance with Camilla and even features her saying the line, "Yeah that's right tell 'em, baby." Lucious and Cookie exchange glances before he whisks Camilla away to his study for some private time.

Their meeting isn't what you think it is, however. Lucious doesn't put the moves on Camilla, but he is curious about just how much she loves his son. He plays Camilla like a fiddle -- actually, she plays herself -- when she turns around and brings up money. And that's when Lucious gets her right where he wants her -- literally because as she tries to leave the study he locks her in by pressing a hidden button on his desk. With no choice but to stay, Camilla hears Lucious out and he asks her to name her price to get gone. Camilla balks, but then the elder Lyon starts to air out all of her messy business and financial troubles. Lucious further breaks it down for her that Hakeem's not her pet project because he's making Hakeem in his image much like God made man. Yes, he said this with a straight face.

Little Lola still isn't asleep so Jamal and Uncle Hakeem decide to put on a show for her. Hakeem threatens to rap "Drip Drop," but Jamal thankfully stops him before he gets too far into it. Together the brothers join forces to sing "Lola," and the child is thoroughly entertained and put straight to sleep.

While Hakeem is distracted with his niece, he doesn't know that his dad is getting ready to deport Camilla. Lucious calls over Malcolm to the house who's given instructions to put her on the first thing smoking on a one-way plane ticket to London. He also writes her a check for the first installment of the Get Outta Hakeem's Life payment plan, which she rips up and throws in his face before cursing him to hell. Lucious is unbothered and bids her bon voyage then goes about his business.

Rhonda is at the signing in Andre's place, and Lucious is not feeling her presence there whatsoever. They exchange some words, and she lets him know that he's got her twisted because she's not some trust fund baby and has had to work hard for hers. She begins to sign the papers, but she reads the fine print and notices some discrepancies that all the sons' shares have been reduced. Upon finding this information out, Cookie blows a fuse and goes off on Lucious for cheating their sons out of their due. That's when Lucious tells her that he did what he did to them to give her an equal share in the company. Cookie's intrigued by this news, but Rhonda is still taking Lucious to the mat and not a happy camper. As things start to escalate, Jamal and Hakeem appear -- Mal wondering what's going on and Hak wondering where Camilla is. Before anyone gets an answer, Vernon enters the room looking disheveled and with Olivia and Reg in tow. Lucious is pissed and he questions Vernon about what's going on with Olivia and who this Reg character is.

Andre is getting some much needed -- and late night -- music therapy from Michelle. They're sitting together at the piano while she plays and sings the song "Remember the Music." Andre does seem to be in a better place, but his issues are more than he can bear. But Michelle knows exactly what he needs. In the "gotcha moment" of the season, she locks the door, kneels between Andre's legs and moves her face centimeters from his then says that they should pray. Andre rebuffs her initially but he does ask her to pray for him. They lock hands and she does.

The uninvited guests at the Lyon house are still there, and Cookie tries to make small talk with Reg. Jamal overhears Cookie asking Reg about his ink and realizes that the scary birds that Lola talked about earlier were his tattoos! He asks Olivia what's really going on with old boy, and she whispers, "Help me." Jamal springs into action to confront Reg, but unbeknownst to him, Reg is packing heat and he pulls a gun and points it at Jamal's head. Everyone freezes and tries to talk some sense into Reg who for some nonsense reason is mad at Jamal for marrying Olivia and getting her pregnant -- or so we think!

Lucious drops the bomb of all bombs when he exclaims that he "put the baby in" Olivia and is Lola's father! It's a jaw-dropping revelation that shocks everyone in the room. Come to find out that when Lucious arranged the marriage of Jamal and Olivia back in the day that he was screwing her the whole time and told her that if she married his son he would make her a star. THIS dude! Jamal asks Olivia if this bombshell is true and in a moment of distraction Cookie tries to knock the gun out of Reg's hands, but he overpowers her and ends up putting the gun to her head. Lucious tries to reason with Reg to shoot him instead, and, as the most hated man in the room, he gives some very convincing reasons why. Reg listens, but he looks like he's about to pop off and shoot everybody up in that joint. As he waves his gun around a single shot rings out, and he's shot in the head -- by Malcolm! Lucious -- even after Malcolm is the clear hero in this scene -- tells Hakeem and Jamal that he saved them and further proves that he is insane in the membrane.

The next day at the Empire Entertainment offices (was calling in sick not an option?), Jamal bids Olivia and his half-sister (!!) Lola goodbye and Olivia tries to explain why she did what she did how it came to this. Jamal hears her out and understands the predicament she was in. Lola says the cutest goodbyes to Rhonda, Andre (who's somehow out of the hospital), Hakeem, Cookie and, last but certainly not least, Jamal who she leaves her stuffed animal with to keep him safe. Cuteness overload in full effect.

Cookie reports to Lucious' office to speak with him. He tells her that they have some unfinished business from last night to discuss, namely his wanting to put a ring on it -- again. Cookie tells him that she's no longer interested and reads him for what he's done to their sons. Plus she sees through his nice act and tells him, "You just don't want to die alone," before leaving him alone in his office to think about his life and his choices.

Oh, but Cookie's not done. No sooner than she leaves her old man's office, she goes to find her new boo. Malcolm is concerned that she's not suffering any trauma from the previous night's events, but Cookie is concerned with when and where they can be alone together. Cookie's body is ready for Malcolm's chocolate milk. We think she's gonna need dj harvey dent's GTD V1 mix to set their rendezvous off.

Everything will come to a head in next week's two-hour Empire season one finale. It will be epic. Plan to tune in at 8 p.m. on Wednesday, March 18th, and come back here on Thursday for the final Empire Watch of the season.