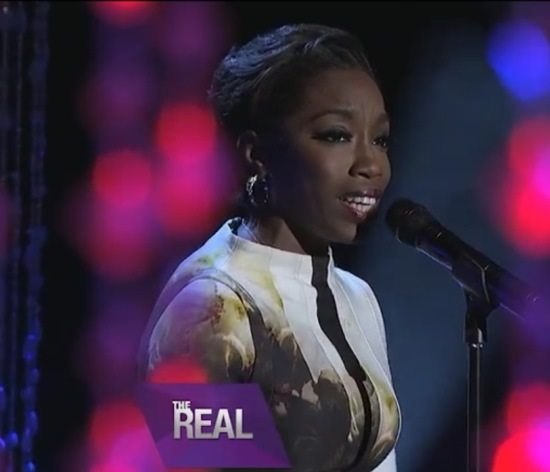 We're happy to see Estelle back in spotlight. Having already released a few singles and videos from her fourth studio album, True Romance, the Brit darling is making the daytime talk show rounds to continue to promote the album. Last week, she hit the Big Apple to visit the ladies of The View and inspire the audience with a gospelized version of "Conqueror." Of course, she has to show the West Coast some love, too -- so she stopped by to chat with the ladies of The Real, as well as debut her latest single, "Silly Girls."

Co-written by Estelle and Sam Dew, the J.U.S.T.I.C.E. League-produced tune is a heavenly slice of nostalgia with its inspired sample of Ace Spectrum's "I Don't Want To Play Around." Despite the slow-tempo, the crowd was on their feet as the songstress emotively sang of taking a chance on love.

She also confirmed news of another major TV appearance this week. The chanteuse will make her debut as the character Delphine on the ratings juggernaut that is FOX's Empire, this Wednesday night. Though we already gave hint of this last month with our piece on the Season 1 Soundtrack, we're still excited that Estelle is joining the ever-growing list of musical guest stars on our favorite guilty pleasure.

Check out her performance on The Real, then take a listen to her duet with Jussie Smollett on a revamped version of "Conqueror" ahead of tomorrow night's episode. Pick up your copy of True Romance on iTunes, and tune in to Empire this Wednesday night at 9 p.m. ET on FOX.


TAGS:  Ace Spectrum, audio, Empire, estelle, J.U.S.T.I.C.E. League, Jussie Smollett, Sam Dew
Previous: Morning Soul: Do You Got A First Aid Kit Handy? Next: Jodeci Is ‘Checkin For You,’ But Are You Checkin’ For Them?