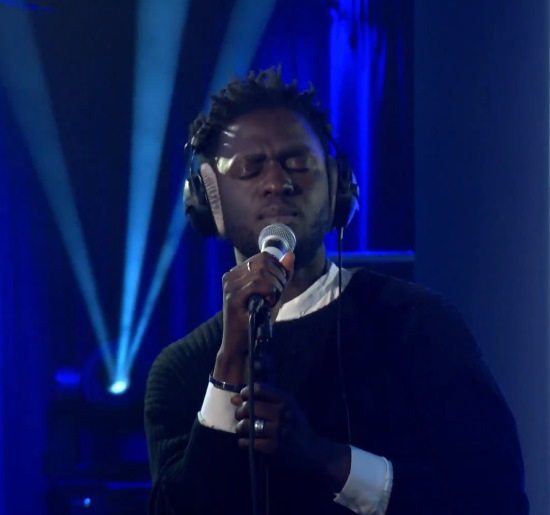 One of the reasons we love Kwabs so much is because of the emotive warmth of his voice. At this point, he could sing from a driver's manual and still manage to make us feel something. His singles and EPs were clearly tailor-made to showcase his talents, but the Londoner is equally at ease performing cover songs. From James Blake to Katy Perry to Michael Jackson, Kwabs manages to deliver something familiar, yet distinctive.

Such is the case when he stopped by BBC Radio 1's Live Lounge to cover Ed Sheeran's "Bloodstream." Staying true to the original melody, Kwabs takes the "less is more" approach to the haunting track, singing with an emotional transparency that speaks to the soul. The engaging harmonies of the background singers and passionate accompaniment of the band only draw us further into the narrative. But it's the fiery delivery of an added verse by UK grime artist Stormzy that takes the performance to another level. Watch below to see the performance that had Ed Sheeran himself saying "so so good, thank you!!"

In addition to gearing up for the release of his debut LP Love + War (available for pre-order through his website), Kwabs is currently on tour with Sam Smith, performing as the opening act for European leg of the In The Lonely Hour Spring 2015 Tour. Ed Sheeran is gearing up to release his own new version of "Bloodstream" featuring Rudimental. Preview the audio below and pre-order it on iTunes.