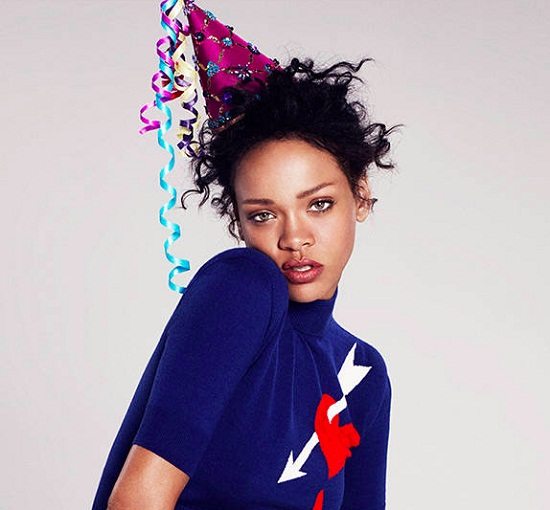 The planet's favorite Bajan chick Rihanna is getting ready to make her animated feature debut with the arrival of Dreamworks' latest family-friendly flick Home. The kiddie movie will find RiRi voicing Tip, a young girl in search of her mother. Tip gets some unlikely help from an extraterrestrial friend, with a whole host of funny, heartwarming high jinks ensuing, of course.

Rih isn't only working her speaking voice for the film, though. She also lends it to the film's soundtrack with three new songs. Her track "Toward the Sun" premiered late last month and, as we near the soundtrack's release date, we get to hear her two other contributions, "Dancing in the Dark" and the Rodney Jerkins-produced number "As Real As You And Me." "Dancing in the Dark" is pretty much what we'd expect from Rihanna (minus the profanity or sexual innuendo, of course), a reggae-tinged pop jam that's fun for everyone.

However, "As Real As You And Me" throws a curve ball. While we've heard Rih go all ballad-y before, this one is special. As I've written before, it's obvious that Rihanna's been meeting with a vocal coach, and "As Real As You And Me" is proof positive that it's paying off. Backed by only a piano, Rihanna sounds kind of great (I can't believe I'm typing that sentence) as she belts out the lyrics with such a great sense of sincerity and emotion that you'll probably hear this one again come next year's Oscars season. Color me surprised.

Home is set to hit theaters on March 27th, but it's soundtrack — which also features a selection from Jennifer Lopez — will make it's way into stores on March 23rd. Check out "Dancing in the Dark" and "As Real As You And Me" below and see if you'll be just as shocked as I am.

"Dancing in the Dark"


TAGS:  "rodney jerkins", audio, jennifer lopez, rihanna
Previous: Full Crate x Mar Give Us A Peek Inside ‘Her Window’ Next: Ego Ella May Wonders ‘How Far’ She Should Go