Rihanna Was About Her ‘Money’ At The 2015 iHeartRadio Music Awards 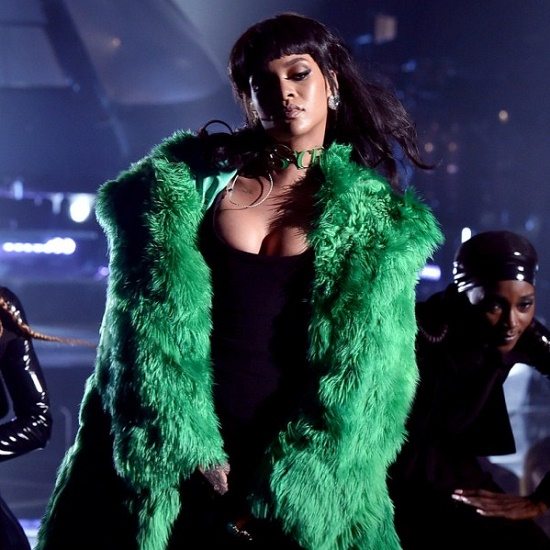 Last week, bad gyal Rihanna lit up the 'Net when she released her new single "B***h Better Have My Money," from her upcoming new album, tentatively titled R8. While it's not entirely a new sound from RiRi (OK, it's really just more of the same ol' same ol'), the song's eff you pay me mentality has been adopted by many (especially those in the freelance life) as their current ratchet anthem.

It's only fitting, then, that Rih hit the stage at the iHeartRadio Music Awards with enough attitude and swagger to shut things down as she performed the newly released track. The performance itself was a fairly simple one, featuring several dancers clad in all-black outfits while a helicopter, blades still spinning, sat center stage. Serving Lil Kim circa the "Crush On You" video realness, from the tiny black dress to the money green fur, Versace choker, thigh high boots and shades, Rihanna stepped out of the helicopter and immediately gave it all to crowd. This being yet another awards show that plays to the younger crowd (sample category: "Best Fan Army"), the fans and celebs alike ate it all up with a spoon. Sorry folks, but it doesn't look like this one is going anywhere anytime soon.

Check out Rih playing bill collector at the iHeartRadio Awards below.