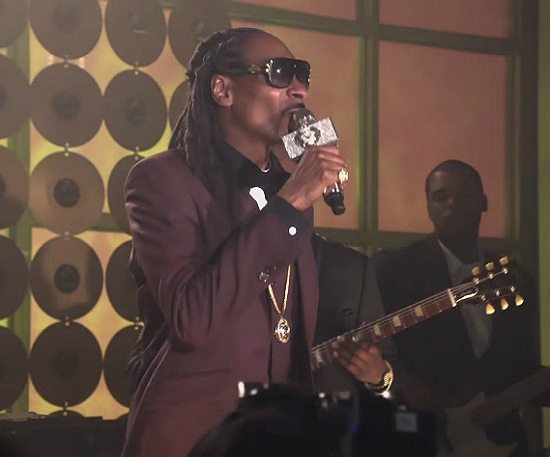 Tonight's season finale of FOX ratings juggernaut Empire promises to be filled to the brim with drama. It also promises to be a star-studded two-hour affair, with appearances from the likes of Rita Ora, Charles Hamilton, Jennifer Hudson and the legendary Patti LaBelle all on tap. They've also got West Coast hip hop icon Snoop Dogg, who will be playing himself and using his appearance to help market his upcoming Pharrell Williams-produced album BUSH.

During the episode, Snoop performs his latest single, "Peaches N Cream," a smoothed-out, playa-rific jam that's in that early '80s R&B realm that Skateboard P has found himself in as of late. Decked out in a purple suit and backed by a band, a Charlie Wilson-less Snoop lip syncs for his life in the clip, but you still feel the rapper's laid-back Cali vibes. Unfortunately, this is just a performance clip and doesn't reveal much about the plot of tonight's episode, which is sure to be a scandalous affair. Still, we're glad to see the first "live" performance of "Peaches N Cream" and look forward to what will surely be some highly inspired visuals from The Doggfather soon.

Check out the performance below, and look for BUSH to arrive in stores on May 12th (though it's available for pre-order now on iTunes).