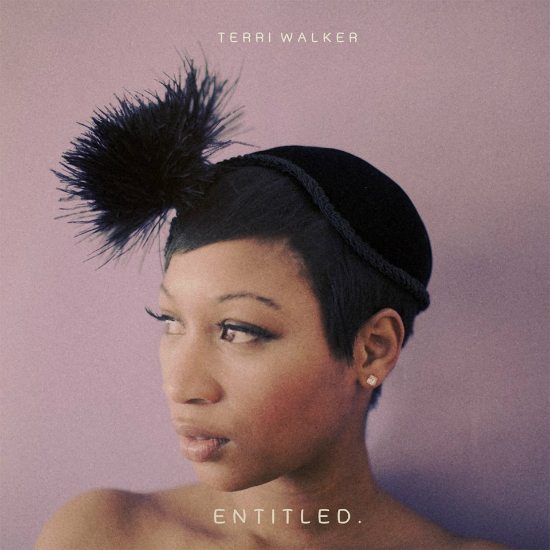 Entitled is a pretty bold name for a new album. The big question is, entitled to what and from whom? In Terri Walker’s case it not only plays nicely on her debut album’s Untitled moniker from 2003, but it also begs the listener to judge her by the standards implied in that very title. That she feels entitled in any way is shaped by a past that unhappily shares every cliché from many an artist's career torn asunder by a music business more interested in business, than music.

After a promising start to her career, the law of diminishing returns took hold until she provided backing vocals for the likes of CeeLo Green. The doldrums seemed the place to be, as she doubted the dream of solo success. But then, there became a sign that things might change. A green shoot of recovery that grew tall and blossomed into beauty with her work with Nicole Wray as Lady finally brought her back to public consciousness and reminded people of her impeccable pedigree. Unfortunately, that pairing was short-lived after making some noise in 2013.

So here Ms. Walker is. Refreshed, invigorated and ready to go again, this time under the auspices of an independent label and a sound she herself describes as "raw." Her spirits are high, intentions are clear and only one thing remains to be seen: To what is Terri Walker entitled?

Those intentions are stated very clearly by opener “Already Told Ya.” Those very first moments provide a supremely satisfying thud of live drums and bass, that signal the direction this album takes. Just as Mary J. Blige used the same template to great success last year with The London Sessions, Terri Walker has that golden combination of a live band and soul vocals in perfect harmony. The power trio of bass, drums and guitar post a hard-edged, funk-filled piece of empowered womanhood. That track is followed up by “Bad Boy,” the album's lead single with an off-kilter, playground rhyme, tweet-tweet vocal topped off with horns to create a soul-pop beauty that wins and wins charmingly. The musical palette shifts somewhat for the next two songs as fierce, neck-snapping R&B becomes the order of the day. “Lose Twice” is a potent mix of dreamy guitar licks and pounding percussion that recounts some of the travails of the music industry, and “Skin I’m In” brings the boom-clack to the party along with delicate acoustic Spanish guitar to tell a tale of self-affirmation.

From this point on, the album hits its stride and never lets go. Song after song utilizes the band to great effect, while Terri’s voice is as great as it’s ever been. There is urgency here -- the desire to succeed and produce great music -- is palpable as the collective pull out all the stops. The organ of “Paranoia” sets the tune on fire and sits beautifully alongside the strings and pounding backbeat. “So Amazing” features a distorted guitar and deliciously deadpan tone to kick it off, before it grows into a growling, snarling anti-love song.

The beauty of Entitled is that there is something, whether big or small, that piques the listener’s interest at every turn. Here it’s in the hyperactive piano of “Accelerate My Heart,” there it’s the bass on the jump to the beat funk of “Open Your Mind,” while later it is the '70s soundtrack soul of “Dry Your Eyes.” Without making any forced moves, the twists and turns offer a palette of soul music that hits the spot lyrically as well as musically. “Feel It In the Water” is a genuinely rousing, anthemic number, to be sung loudly and probably out of tune by a very happy crowd at some point in the near future. “Testify” is a funky reggae-tinged tribute to the night and its endless possibilities. Rounding the collection off with some style is “They Say So Much.” It's an acoustic ballad that drips with pain and hurt and a disdain for the array of advice people give, even when their advice isn’t sought. It builds to a full band and backing singers and is a fitting finale to an album that tells us everything we need to know about Terri Walker.

So the answer to the big question posed earlier? Well, it’s a no-brainer really. Terri Walker is, on this evidence, entitled to many things: A huge sense of accomplishment; every shred of success that this album deserves and our thanks for not letting the industry drag her down and for creating the soul-filled goodness on offer here. Entitled indeed.