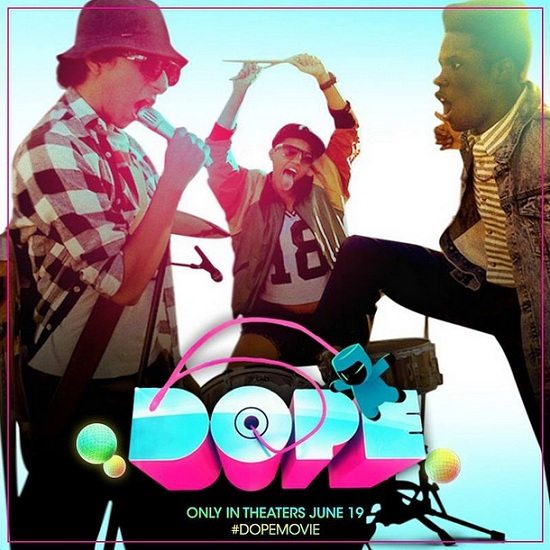 The feature film DOPE was the talk of this year's Sundance Film Festival, and this summer it's looking to make a splash at a movie theater near you. Director Rick Famuyiwa's coming-of-age dramedy focuses on Malcolm, a quirky outsider and straight-A student coming straight out of Inglewood, the setting for Famuyiwa's beloved debut The Wood. Malcolm also happens to front a punk band with his two best friends and is a '90s hip-hop head. As with most of these stories, a misunderstanding involving a beautiful girl and a party leads Malcolm and his friends into a misadventure involving illegal narcotics, Coachella and a pissed off drug dealer. How he gets into and out of this situation ultimately leads Malcolm on path to discovering who he really is.

However, as if that premise isn't enough, the film also boasts four new songs from Pharrell Williams as a part of the soundtrack. With an all-star cast that features Shameik Moore as Malcolm and includes Zoe Kravitz, A$AP Rocky, Quincy and Chanel Iman (and boasting Sean Combs, Forest Whitaker and Pharrell as producers), it's certainly got enough black star power behind it to at least warrant a viewing. Check out the trailer below, and be sure to pick up your ticket for the flick, which arrives in theaters on June 19th. For more DOPE, stay tuned in to the film's official website, Facebook, Twitter, Vine and Instagram.