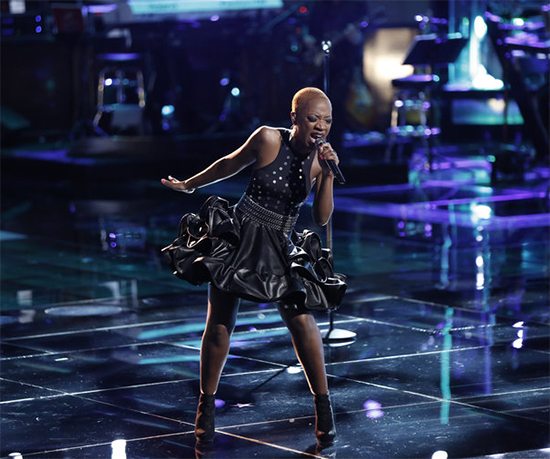 Kimberly Nichole’s reign over this season of The Voice just won’t let up. After Christina Aguilera stole her from Pharrell’s team during the battle rounds, our girl Kim took to the stage and showed the world what we love most about her as the live playoffs began this week. She rocked out and sang the 4 Non Blondes classic 1992 hit “What’s Up,” after Aguilera apparently had to personally call Linda Perry herself to get the song cleared specifically for Kim to sing.

Now if you have followed Kim for the past few years, then you know that “What’s Up” is one of her signature cover songs and was even featured on her The Rock Ballerina EP back in 2012. But don’t think that means that the Seattle songstress got too comfortable with her performance this week. She beefed up this familiar song and brought new life to her rendition. As if watching her and her signature tutu on national television receiving the love that she so greatly deserves wasn’t enough to make us a bit teary eyed, Kim’s mother and 91-year-old great grandmother watching proudly from the studio audience made the moment even more special to watch.

Join us and keep tuning in to NBC’s The Voice, and be sure to download her cover of "What's Up" from iTunes as well as The Voice voting app on iTunes or Google Play so that you can send some love Kim’s way as we continue to root for her to be crowned this season’s winner.


TAGS:  4 Non Blondes, christina aguilera", kimberly nichole, Linda Perry, pharrell williams, The Voice"
Previous: Morning Soul: We Can Take Our Time, We Ain’t Gotta Rush Next: Rob Taylor ‘Earned It’ On ‘The Voice’ With This Cover Of The Weeknd