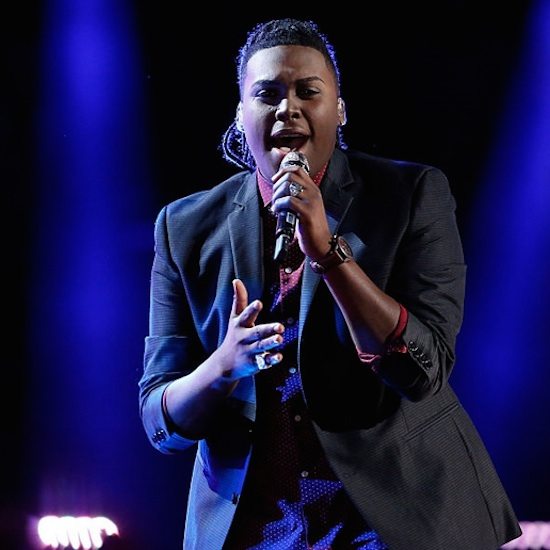 Season eight of The Voice got real good last night with Team Christina battling it out against Team Adam in the live playoffs to determine who goes on to the top 12 next week. It was barely a competition, though, because Christina Aguilera has quite a handful of talent, and her team threw down all the trump cards. Between our girl Kimberly Nichole, India Carney and Rob Taylor, these three singers clocked in some stunning performances.

Of that trio, Rob Taylor really surprised with his live cover of The Weeknd's hit single "Earned It." Taylor got fifty shades of soulful with his rendition and may have hit just as many notes, flexing a vocal range that The Weeknd wishes he had. His voice was strong and clear whether he was hitting atmospheric highs or digging into the depths of his lower register. And not only did he sound phenomenal, but Taylor swaggered around the stage like a seasoned pro. He had presence and charisma as he worked The Voice audience members standing in the pit into a lather singing the sexy song and interacting with them. By the time he dropped to his knees for his big finish, it was a wrap. He slayed The Weeknd's original and solidified himself as a serious contender in less than three minutes.

Rob Taylor's kick-ass "Earned It" follows impressive covers of Al Green's "Love and Happiness" and Luke James' "I Want You," which is the song that started his journey on The Voice when he performed it on the blind auditions and led Xtina to serenade him. The Baton Rouge, Louisiana native is one to watch this season on The Voice and one to vote for as well, which you can do via the handy dandy app (available on iTunes or Google Play). He most certainly "Earned It" last night.