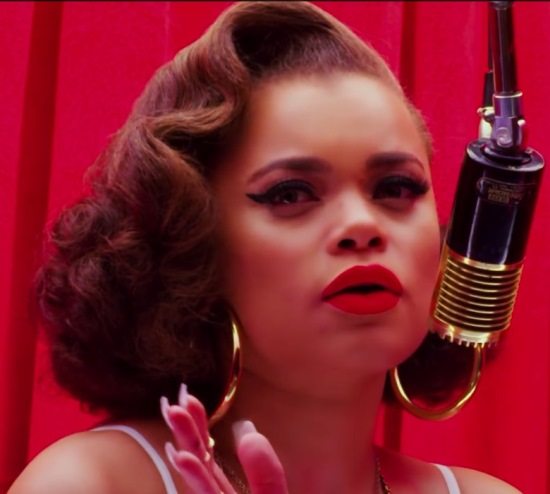 If you were a rising star eager to share your music with the masses, the task of completing and promoting your debut album may prove daunting. But if an Oscar-nominated movie director offered to direct the music video for said debut, you'd know you were on the brink of something great. We imagine that Andra Day felt a similar sense of validation when Spike Lee approached her after hearing her perform during the What Happened, Miss Simone? concert at the Sundance Film Festival. And after hearing her lead single "Forever Mine" last week, we shared Mr. Lee's enthusiasm for her remarkable talent.

Making good on his offer, Spike is at the helm of the song's new visuals. Opening with strains of The Flamingos' "I Only Have Eyes for You" wafting in the background, he wastes no time making sure that all eyes are on Ms. Day. Filmed in the lobby of The Standard Hotel (Hollywood), the hotel's "box girl" art installation was transformed into "Da Box" for our viewing pleasure.

The uncomplicated piece focuses on the singer as she entertains the voyeuristic patrons during her late-night shift. Andra has described the song as a "love song to God," so if you're expecting something NSFW you'll be sorely disappointed. Instead, the singer spends her time writing, meditating, praying and, of course, singing. It may sound a bit puritanical, but Andra -- looking flawless with bold red lips, dramatic winged eyeliner and a perfectly pin-curled coif -- is utterly engaging throughout. She recently explained the concept like this: "It's the irony of being trapped in the box, but that actually being my most free place. All of my peace comes in that place, so the box represents that." Press the play button below, and let us know if you're feeling Andra's starring role in this Spike Lee joint.

Andra Day's debut album, Cheers to the Fall, is scheduled for release on August 28th. But thankfully, we don't have to wait that long to hear more of her retro-flavored soul. Scroll down for some additional previews of the album with "Gold," "Rearview" and "Only Love." These three new tracks, along with "Forever Mine," are available for instant download when you pre-order Cheers to the Fall on iTunes.


TAGS:  Andra Day, audio, spike lee, the flamingos
Previous: Jacob Latimore Has ‘Earned’ Our Praise With This Cover Of The Weeknd Next: James Fauntleroy Offers His ‘Help’