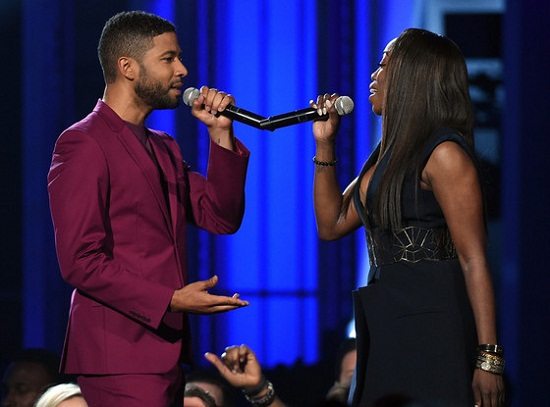 You know how we know Empire is big? They FOX show's stars were able to get four minutes to plug their show on rival network ABC during this year's Billboard Music Awards. The star-studded event, which took place Sunday night, brought out a bevy of stars and high-profile performances, but perhaps none were as anticipated, especially due to the show's breakout success and recent unveilings concerning its second season.

The medley started out with Jussie Smollett and Estelle doing their duet "Conqueror," and it was...OK. Though both Jussie, decked out in a purple suit, and Estelle, rocking a black coat and wide-legged trousers with a gold-detailed belt, looked spectacular, the actual performance was a bit lackluster. That could be because "Conqueror," while a feel-good anthem, isn't exactly something to get you moving. Thankfully, the next song was the infectious good-time "You're so Beautiful." Mr. Drip Drop himself Yazz hit the stage to deliver his verse surrounded by ladies in leotards. Jussie, of course, came in to deliver his chorus, making the ladies and the crowd go "up-down-up-down-up-down." We can't help but wonder how the performance might've gone if maybe there was a bit more of "Beautiful" and a bit less of "Conqueror. But we digress.

Check out the Empire crew putting on for their show on this snippet right here.