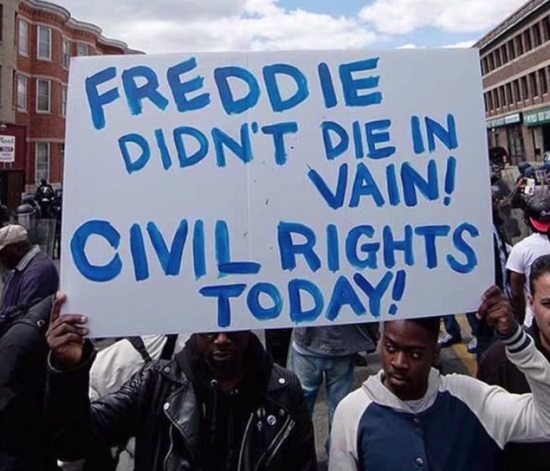 While we are most definitely anxious to hear the Nina Simone tribute album that will serve as a companion to the upcoming Netflix documentary What Happened, Miss Simone?, we weren't expecting to hear anything from it so soon. However, with the recent civil unrest in Baltimore and the charged political climate, releasing Jazmine Sullivan's cover of "Baltimore," a Randy Newman song which Nina covered in 1978, couldn't be more timely or needed.

Just as Nina gave the original some added punch with a tinge of reggae styling, so does Jazmine, who delivers an expressive vocal, which is soft and quiet during the verses but builds and swells into a full lament on the chorus, her rasp conveying a weariness. The video used to premiere the track is just as powerful as Jazmine's take. It opens with an interview with Nina in which she discusses how her activism and artistry are intertwined. It then shows footage of uprisings in Baltimore in both 1968 and 2015, as well as clips from an interview with activist Angela Davis, to show that though the years and players have changed, the same struggle is still going on. Or as was written on Facebook:

"2015 looks a lot like 1968.
Another black man dead in police custody….
Another family grieving…
Another city in turmoil...

The post which revealed the song also brought more info about the album and the players involved, though it failed to offer up any information about a release date. While we already know that it's being produced by Robert Glasper, we've also learned that in addition to Jazmine and Nina's daughter, Lisa Simone, we can also expect contributions from the likes of Gregory Porter, Alice Smith, Common, Andra Day, Mary J. Blige and Lauryn Hill. This is looking like an album that no one will want to miss. Take a listen to Jazmine's take on "Baltimore" when you watch the clip below and check back here for more updates about the upcoming tribute album.