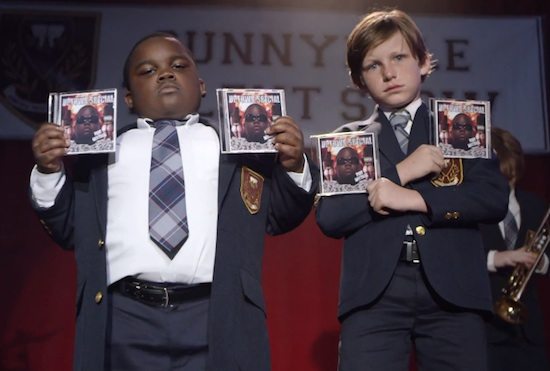 After bringing us a hilarious visual for "Uptown Funk," Mark Ronson and Bruno Mars are back at it with the music video for "Feel Right" featuring Mystikal. This time Bruno is behind the camera in the director's chair alongside Cameron Duddy, and Mark and Mystikal are on the sidelines for the majority of the clip. Instead, we are treated to watching the Sunnydale Talent Show where a bunch of rambunctious youngsters perform "Feel Right" and are led by an energetic little fella who is lip syncing for his life and will give you yours when you watch him in action.

Featuring a cameo by Florence Henderson of Brady Bunch fame as the prep school principal, the star of this talent show is by and far the rotund cutie getting on the good foot and leading his band of friends while mesmerizing his classmates watching in the audience. Even the school janitor can't help getting his groove on. Bruno, Mystikal and Ronson pop up at the end to show their approval as the talent show judges with perfect scores across the board. This kid definitely deserves a 10.