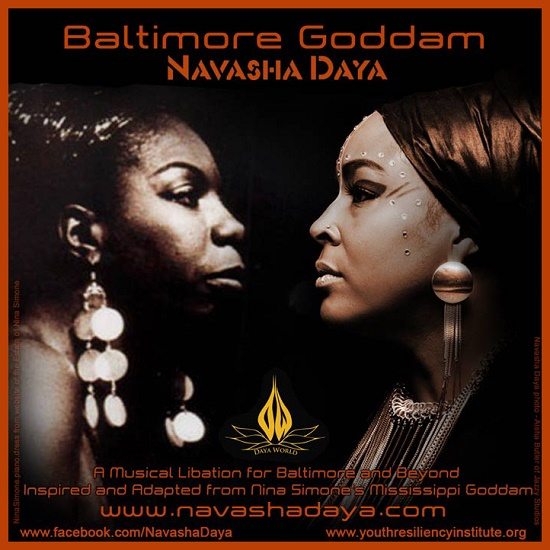 All eyes are still on Baltimore as the Charm City has become the latest American city to erupt in civil unrest in the wake of horrific instances of police brutality. But this isn't a new predicament for the city. It was one of many cities that erupted in riots after Martin Luther King, Jr.'s death in 1968. It's also been a city plagued by violence and governmental neglect of its most vulnerable communities for decades.

Fertile Ground singer Navasha Daya knows these truths all too well as she's a Baltimore native. In 2012, as part of a Nina Simone tribute, she reworked Nina's seminal song "Mississippi Goddam" into "Baltimore Goddam" in order to shed light on what was going on in the city. With the recent rash of deaths of blacks across the country at the hands of the very police forces meant to "protect and serve" (and the many more that have probably gone unreported) and the turmoil in her own city, Navasha revisited the track and updated it to speak to the times. With just a guitar accompanying her, she begins, "New York got me so upset / Ferguson makes me lose my rest / And everybody knows about Baltimore, goddam!"

Of the song, Navasha writes:

I dedicate this song to the children and youth in Baltimore City and worldwide who live in disinvested communities; to youth who are angry, sad, scared, hungry, not listened to, murdered, neglected and want change for themselves and their families; to Youth Practitioners who tirelessly serve youth and the community; to those who want "Equal Rights & Justice" as Reggae legend Peter Tosh penned, and for all those who have risked their lives in the struggle to uplift humanity.... The Human Family must do better!

It's a poignant, haunting reminder that not much has changed between the time that Nina first sang of Mississippi and Navasha now sings about her beloved hometown. And while Navasha's version is just as urgent and poignant, we long for days when artistic statements like these aren't necessary.

Take a listen to the song right here, and if you want to help make a difference in Baltimore and beyond, check out organizations like Baltimore's Youth Resiliency Institute and see how you can help.