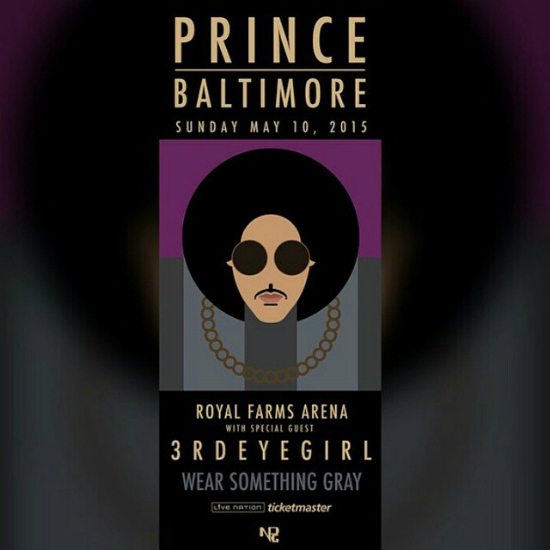 After an announcement last week that he recorded a protest song entitled "Baltimore" in tribute to the city, Freddie Gray and the unjust killing of Black men at the hands of law enforcement, Prince has more big news for fans. While we patiently await the release of this new track, those in the Baltimore area and surrounding cities can make plans to see Prince live on stage at the RALLY 4 PEACE Concert on Mother's Day, Sunday, May 10th.

The concert was announced late Tuesday night by LiveNation and will take place at Royal Farms Arena in downtown Baltimore. Prince will be supported by 3RDEYEGIRL and word is that more industry superstars are expected to attend and may even join P on stage.

In a statement released by LiveNation about the reason for this RALLY 4 PEACE concert, it was said, “In a spirit of healing, the event is meant to be a catalyst for pause and reflection following the outpouring of violence that has gripped Baltimore and areas throughout the U.S." This sounds like our kind of cause, and we can't wait to attend. If you'll be joining us, then be sure to wear something gray in honor of everyone lost by violence.

Tickets for the RALLY 4 PEACE Concert go on sale today at 5 p.m. ET at Ticketmaster/a>.