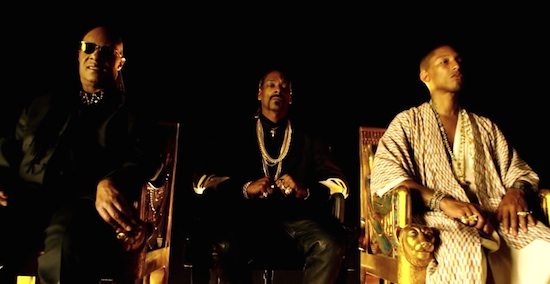 Since its release, Snoop Dogg's new album BUSH has stayed in heavy rotation around these parts. Snoop and producer Pharrell Williams have concocted one of the most soulful, danceable, funky and fun hip-hop albums we've heard in a while. Not only is the music the jam, but the visuals have been spectacular as well and truly taken the songs to the next level. The music videos for "Peaches N Cream" and "So Many Pros" have been a feast for the eyes, and Snoop has done it again with the clip for "California Roll."

The sun-drenched smoker's anthem gets a retro futuristic treatment courtesy of director Warren Fu who masterfully brings Snoop and Pharrell's combined visions to life with a twist on Disney's Star Tours ride. The video is set in Los Angeles in 1946 and we see a group of Black people entering a theatre. This isn't just any old movie theatre, however, with their seats equipped with seatbelts and a robot named Canubis 420 voiced by Snoop greeting all the "hepcats and mops." The audience is told enjoy the "ride to future Los Angeles" on the "high velocity airbus" and to strap in tight. This crowd, which includes the forever beautiful and ageless Nia Long and the song's legendary guest star Stevie Wonder, is in for the ride of their life once the curtain is drawn back to reveal the futuristic scene, their seats start to move and the beat drops.

The 1940's version of future Los Angeles includes flying cars, pyramids and ancient Egyptian symbols and hieroglyphics on high-rise buildings. This L.A.-meets-Egypt mashup is kinda fly, truth be told. Snoop Dogg looks cool as hell while driving/flying through the clouds solo and with Stevie or standing atop a pyramid sing-rapping with Pharrell (whose gold teeth coordinate perfectly with his jewelry and long, flowing robe). Snoop looks so cool that he has Nia Long catching feelings and later imagining herself in the scene with a Cleopatra-styled wig and clothes on and riding shotgun with the lanky rapper.

This "California Roll" video is so dope that it has us wishing this was really a thing -- both the retro ride and this future vision of Los Angeles.