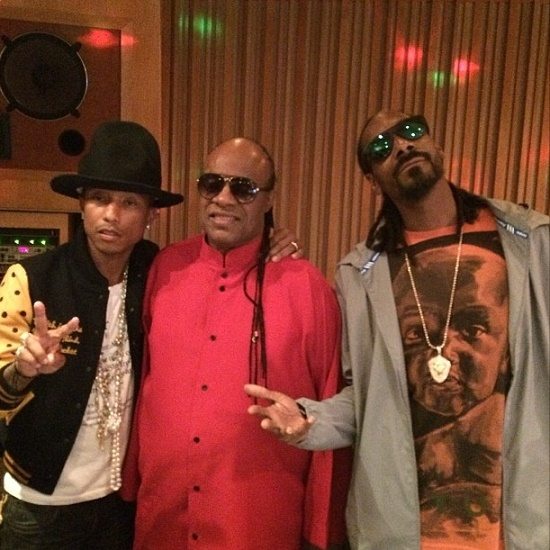 Snoop Dogg's BUSH, which will arrive in a week, is already sounding like a party with tracks like "Peaches N Cream" and "So Many Pros" setting the mood. And while we already know that Charlie Wilson was invited to the jam, he's not the only soul music veteran on the guest list. Snoop just unveiled BUSH's opening track, "California Roll," and it features none other than the incomparable legend Stevie Wonder.

While it's not Snoop and Stevie's first collaboration — that distinction goes to "Conversations" from Snoop's Tha Blue Carpet Treatment — it is the first wholly original creation between the two. Pharrell Williams laces the joint with a smoothed-out, guitar-driven groove tricked out with some of his Neptunes-era atmospheric synths. But it's Stevie's easily identifiable harmonica riffs that truly set the production off. With a soundbed set up so nicely, it's pretty much easy for Snoop to come in and do his rap-singing thing, which he does with effortless cool as he coerces a pretty young thing to roll him up a little somethin' (no, this song is not about sushi, just in case you thought otherwise). Add Pharrell handling the chorus and Stevie working his magic with ad-libs throughout, and you have a jam perfect to chill out to in the warm days ahead.

BUSH will hit stores next Tuesday, May 12th, and judging by the rest of the tracklist, it's looking like more fire is to be found when it arrives. Twist it up (the volume, that is) and take a listen to "California Roll" right here.


TAGS:  audio, charlie wilson, neptunes, pharrell, snoop dogg, stevie wonder
Previous: Morning Soul: Never Can Give It Up Next: Sevyn Streeter Wonders ‘How Bad Do You Want It’