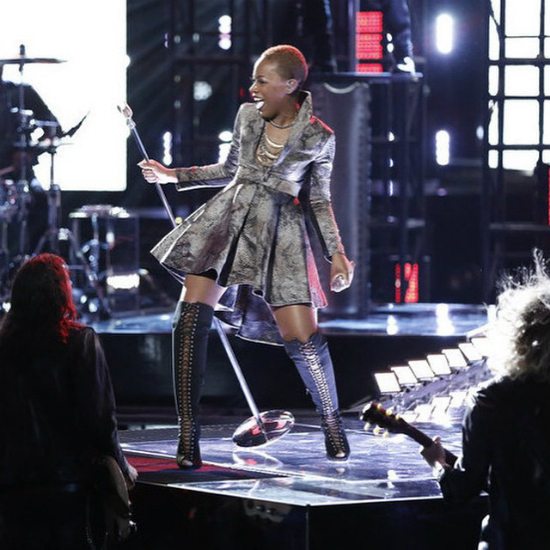 Kimberly Nichole continues to show up and show out weekly on The Voice. For her next amazing musical feat as part of the Top 6, the rock and soul singer gave amazing performances of Michael Jackson’s “Dirty Diana” and Tom Petty's 1989 classic “Free Fallin” on last night's episode. Kimberly proved she not only has the chops to cover both songs, but gives both artists a run for their money.

A selection inspired by her mother, Kimberly superbly interpreted the lyrics to “Free Fallin'” in a way that Tom never could. Dressed to impress in a sparkling little tutu as usual, Ms. Nichole does what you’re supposed to do with any remake: pay homage to the tune, while putting your own spin on things. She gave the subdued vibe of the song new depth and kicked things into high gear towards the end. Oh! And the way she closed the song by shouting out her mother, inadvertently referencing the opening lines of the song,  just added to the charm of the singer and her song selection.

With her second selection, "Dirty Diana," Kimberly didn't just enter her rock and roll wheelhouse, she busted it wide open. While Michael was known for the way he was able to emote with his lyrical delivery, Kimberly didn't slouch either. Her voice gripped every lyric to the song and didn't let go until you felt it. At the judges table, Pharrell Williams proclaimed that Kimberly had her first official rock n' roll moment with "Dirty Diana." We're glad that it is becoming undeniably apparent that she's a true rock star.

At this point, it’s pretty much expected that Kimberly is going to knock it out the park every week and outperform most of her competitors on The Voice, not to mention Billboard’s Hot 100 Top 10. Check out Kimberly's performances below and try not to get overwhelmed.