Andreya Triana Looks For Her Place Amongst ‘Giants’ 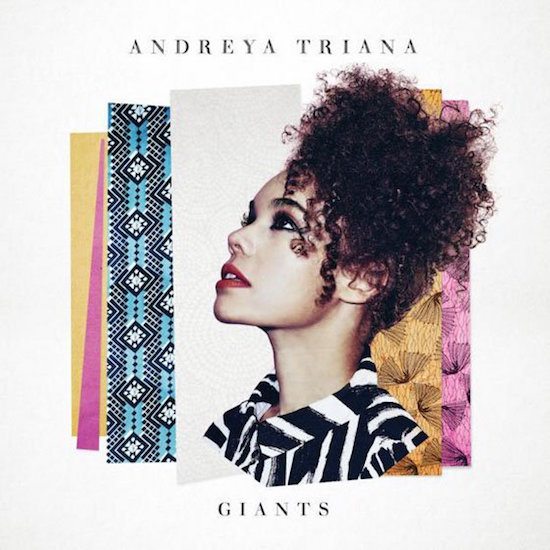 They say a week is a long time in politics, and the lightning paced world of music is no different. So five years between albums could be seen as somewhat tricky, but on her second album, Giants, Andreya Triana seems to shrug any of those concerns off and instead showcases her ruggedly delightful voice and songwriting talents. Her debut Lost Where I Belong was all dreamy, woozy rumination, so what has this time done to her sound and what does this second effort hold for listeners?

Clue number one as to the direction, is the presence of Matt Hales (aka Aqualung) as co-writer and producer. Both Lianne La Havas and Paloma Faith have utilized his talents to the fullest in pursuit of an ever-so-slightly left of center pop-soul sound, so it seems obvious that Triana would seek a little of his winningly popular touch. Clue number two is the EP she last November. Three of the four songs contained on that effort offered a sneak peak into what would be served up, come the album's eventual release -- tender piano ballads and a sound that is swiftly becoming synonymous with UK soul.

“Paperwalls” kicks things off sweetly. A muted piano and horn fanfare ushers in Triana’s gruff, alluring voice and the typically lovely lyric, "No pearly silver gates / No stairway made of gold / Just this empty space / And you, for me to hold." What follows is a gradual build up to a handclap-filled piece of pop loveliness that showcases her honeyed voice beautifully. It’s a fine start to an album that has plenty to offer. Single “Gold” resonates with its strident piano, stomping beat and response background vocals. It’s hard not to be reminded of Adele’s monstrous “Rolling In the Deep,” but Andreya sells it with conviction and her vocal talents.

“That’s Alright With Me” is a slow and steady rumination highlighted by acoustic guitar, strings and lvie drums with life affirming lyric, "As long as there is love / That’s alright with me." “Lullaby” is an open letter to Lauryn Hill that testifies to the power of music to whisk us away from our troubles, and it succeeds on a bed of twinkling keys, delicious coo-ing backing vocals and a breezy pace.

There’s a sense, though, that these are the preludes to the album's main attractions. “Giants” is the first of these, and it is a winningly strong song. When given center stage like this, courtesy of a somber backing, her voice is revealed to be a thing of rare beauty and strength. She's a worthy addition to the cannon of quality British soul singers. What stands out on “Heart In My Hands” is a refusal to go for the cliched rousing instrumental change at the earliest opportunity. It builds slowly and retains the tension on a knife edge, leaving the uplift until 40 seconds from the end, before coming back down to the tender, brittle vocal.

Lyrical preoccupation thus far has been the twin threats of love and personal growth, but “Keep Running” opens the door onto social commentary. A pounding backbeat propels it forward, pushed further by a liberal sprinkling of organ, while the running in the title refers to the daily grind of the impoverished and the anesthetized keeping up with the Joneses that is the preoccupation of the wealthy.

“Changing Shapes of Love” is a light, acoustic piece, as inconsequential as it is enjoyable, but “Clutterbug” with its percussive piano is a good shot in the arm to liven proceedings up a touch, even if it doesn’t necessarily amount to too much. “Song For a Friend” brings us back to the piano, but this time with the added melancholy of the cello. It is tender, earnest and sung beautifully, but what it needs is a tonic to follow it -- a little light relief, a little fun. And that ultimately is what is missing here -- the light that throws the shade into even greater contrast. “It’s Not Over” does its best with a driving chorus and towering background vocals, but the album screams out for a lighter moment or two.

That the album is closed by the stunning “Everything You Never Had (Pt. II)” is fitting. This is a piano ballad of impeccable quality. Sung magnificently and arranged perfectly, the ode to her mother is a touching, emotionally charged brute of a song and embodies everything that Triana stands for.

It is undeniable that Andreya Triana is an artist with talent. Her voice is wonderfully textured and forceful in all the right places, her lyrics are strong and the connection between material and listener is strong because of those things. What the album lacks though is a little fun to serve as a break from the earnestness and serious intent on show here. That minor quibble aside, Giants is an album that still stands tall.