Feel The Vibe Of Mila & BC Kingdom’s ‘Menagerie’ & ‘Ninja’ 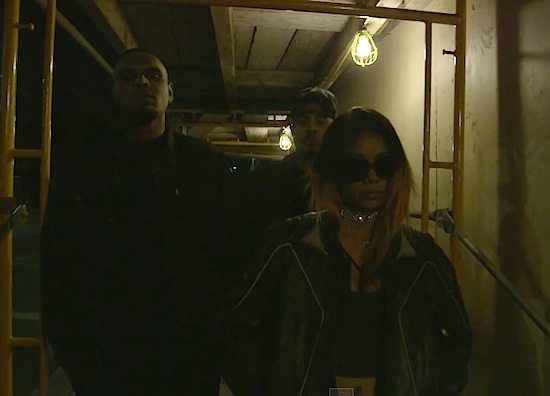 Last month, Los Angeles native Mila (formerly Mila J and still Jhené Aiko's sister) released an EP with fellow westside riders BC Kingdom. Some of you might recognize BC Kingdom from their song "Lock Up" that was featured on the Saint Heron compilation album released in late 2013. The six-song EP, Press Start, features Mila's sultry R&B vocals interspersed with BC's cool, dark vibes.

The duo plus uno released two short visuals for the songs "Menagerie" (a personal fave on the EP) and "Ninja" this week. Perfectly capturing the essence of the track, the video for "Menagerie" was shot in a dark, smokey karaoke spot. Colorful lights and slow motion flashes of both members of BC Kingdom and Mila make you feel like you are inside of the song. You also feel like you are inside of an actual karaoke bar, because the lyrics to Mariah Carey's "We Belong Together" are on the karaoke screen in some of the shots.

The visual for "Ninja" is a swagged out extension of "Menagerie," with BC Kingdom mobbin' down the street and Mila whipping her hair back and forth and flexing on us with chopsticks. These short visuals (they're both about two minutes or less long) definitely left us wanting to see more, which we'll get with the group's plan to release additional music videos shot in different parts of LA. Until then, we'll just play these two clips and vibe out to Press Start, available on SoundCloud now.


TAGS:  BC Kingdom, jhene aiko, Mila, Mila J
Previous: Trey Songz Wants Us To Think He’s ‘The Only One’ Next: Jennifer Hudson Supports Marriage Equality With ‘I Still Love You’