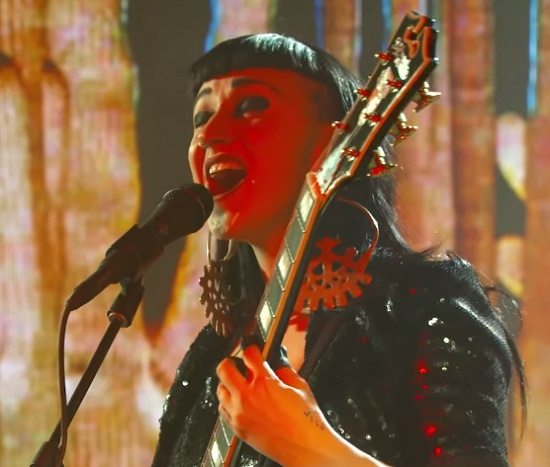 Hiatus Kaiyote has been in full on promo mode since the release of their sophomore effort, Choose Your Weapon. To that effect, they've been performing non-stop, hitting the road on a North American tour and appearing at festivals like last weekend's Roots Picnic. They also somehow found time to make a stop in LA and grace the Jimmy Kimmel Live! stage to deliver a double dose of new music with songs "By Fire" and "Breathing Underwater."

Taking the stage in a glittery sequined outfit with her trusted guitar and large, gravity-defying earrings, the group's lead singer Nai Palm led the quartet through the songs as the fellas gave the audience a musical workout, even adding a few flourishes not found on the album. Of course, being that Nai Palm is only one person and the sole vocalist of the group, some of the album's lush harmonies were lost in translation, especially on the romantic "Breathing Underwater." However, she more than made up for that with sheer energy and an admirable effort to sing nearly every vocal she could.

And then, as if delivering all that musical goodness weren't more than enough, the HK crew gave the audience a throwback with a performance of their breakthrough single "Nakamarra." It was definitely a great time if you caught the show as it aired. If you didn't, however, we've got all three performances right here for you to enjoy.