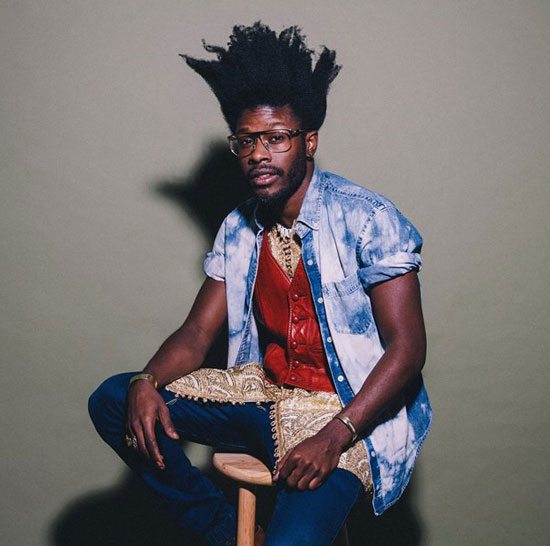 Jesse Boykins III is dropping track after track to leave us a trail so we can find him in his cosmic zone of electro beats. The eclectic singer last gave us a taste of his vintage realness in "The Wonder Years," and now he's dropped three singles -- "When You Get There," "Go For Long" and "Great Idea" -- to ensure we follow him wherever he's trying to take us. Each single offers a different vibe, but they all share Jesse's airy vocals as he paints a story in the three tracks.

On "When You Get There" Jesse keeps things mellow and melancholy as he borrows Hudson Mohawke's remix of "Vista" by Jackson and His Computerband for the single's backdrop. He sings "Tell me where you're going when you get there," over the chorus and strips the instrumentals on the vocals to ensure we get the message. In the track Jesse is sure his significant other will come back to him, and he's not letting her go either. The synth and electronic elements also won't let go of your ears, which keep you trained on Jesse's lyrics and ad-libs.

Once you get there, like Jesse sings, you can press play on "Go For Long." JBIII wrote the song and enlisted the help of  AbJo for production, and they put the finishing touches on the track by mixing it at Red Bull Studios LA. The more upbeat single still has a mellow vibe but also has a few elements that turn the single into a fun ditty to vibe to. Sticking with electro beats and synths, this time Jesse relies on his vocals to paint a colorful picture, singing "I won't let you go for long." We're beginning to think he has a few attachment issues here. Either way, Jesse even goes as far as singing a snippet of Drake's "Hold On We're Going Home" to drive his point.

And finally, since Jesse isn't letting us go any time soon, he debuted another track "Great Idea." This time produced by The Silence Killers, Jesse gets more romantic as he seduces us again with his vocals and boosts our self-esteem. "You don't need too much makeup, makeup, makeup / Your beauty beams without it / Get out your head love / You can chill in the silence / I'm trying to get my cake up, cake up, cake up so we can chill forever." The sweet lyrics and harmonious chorus encourage us to keep this single on repeat.

Since Jesse thought it was a great idea to debut three tracks within hours of each other, we salute him and his work ethic. While the singles don't appear on this 2014 LP Love Apparatus (available on iTunes by the way) you can still listen to "When You Get There," "Go For Long" and "Great Idea" below and let us know what you think of Jesse's trio of newbies.