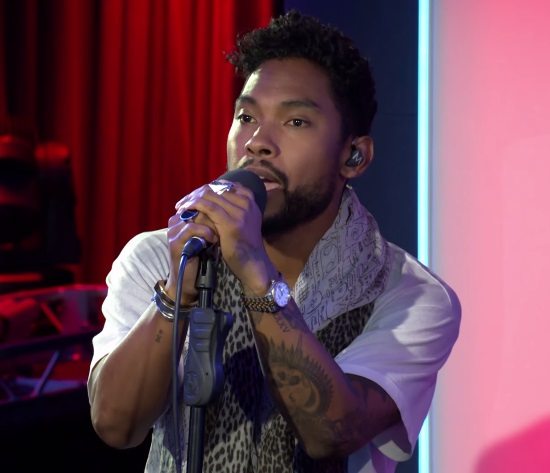 With his WILDHEART set to arrive in less than two weeks, Miguel has been pouring up his latest single "Coffee" for anyone who will listen. His latest stop was across the pond at London's BBC Radio 1Xtra's Live Lounge. With he and his band draped in all white, the petite R&B star gave the sensual single a workout in the studio. They might've been constricted by the studio space, but you wouldn't be able to tell by the performance. Miguel's smooth vocal went aggressively raspy near the track's end, adding an urgency to the sensual song and keeping things rather lively.

But Mr. Pimentel didn't just hit and run. He also took some time to deliver a spirited cover of Slaves' track "Hey." The cover gave the singer, who loves to show off his rock leanings, a chance to rock out with his you-know-what out as he performed the moody number. While the verses remained relatively somber and quiet, Miguel took full advantage of the buzzing electric guitar of the chorus, wailing into the mic and allowing his voice to get as gruff as he pleased. It was a pretty good cover and reminder that Miguel isn't afraid to genre hop when need be.

Get a gander and a listen of Miguel doing the damn thing when you check out video of both performances below. WILDHEART is set to arrive in stores June 30th.


TAGS:  miguel, slaves
Previous: Morning Soul: Get Right Back Next: Stella Santana Is Ready To ‘Switch’ Things Up