SoulBounce Live: D’Angelo And The Vanguard Live At The Fillmore Silver Spring, 6.25.15 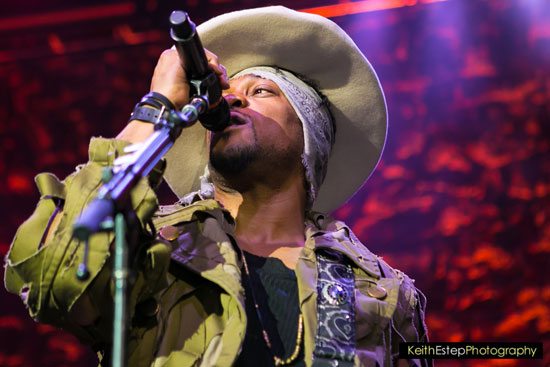 The Fillmore Silver Spring was transformed into a house of worship on Thursday, June 25th. Congregants gathered together for The Second Coming Tour to witness the return of the Black Messiah himself, D'Angelo, and his band of disciples, The Vanguard.

It truly felt like a revival once they hit the stage to the sounds of Black Messiah groove "Ain't That Easy" to raucous applause and screams. D'Angelo and The Vanguard seamlessly blended the new with the old, taking those in attendance from Messiah's "Betray My Heart" to Voodoo's "Spanish Joint" back to Black's "Really Love." The setlist primarily contained new songs, which the crowd loved, but it was when he dug in the crates for hits "Brown Sugar" and a medley of "Left and Right" and "Chicken Grease" that he really got a house full of participation, everyone singing along and following his directives. Songs flowed funky from one to the next with many turning into full-blown jam sessions. The jam of the night came at the end of the show when D'Angelo and The Vanguard returned to the stage for their second encore to perform an epic, more than 20-minute version of "Untitled (How Does It Feel)."

In his recent Rolling Stone interview, D'Angelo was described as "the most singular, visionary star to emerge from — and then transcend — R&B since Prince." That is the perfect characterization of the man who channeled both his Purpleness and the spirit of James Brown during his funkdafied set but is entirely his own artist. No one in mainstream music is performing funk on this level much less seamlessly blending it with soul, jazz, rock, blues and gospel like D'Angelo. Musically he's in a class of his own, but then he kicks things up several notches during his live show by shredding on guitar, tickling the ivories, getting on the good foot with spontaneous dancing and choreography, changing outfits multiple times and being damn sexy in the midst of it all.

What was most striking about seeing D'Angelo live was how healthy and happy he looked. His found his smile again and it's genuine. This is a man who spent a long time in the valley battling his demons, but he has clawed his way back to the top of the mountain and is standing tall. As he should.

Seeing D'Angelo and The Vanguard on The Second Coming Tour isn't just attending a concert, it is a life-affirming experience.