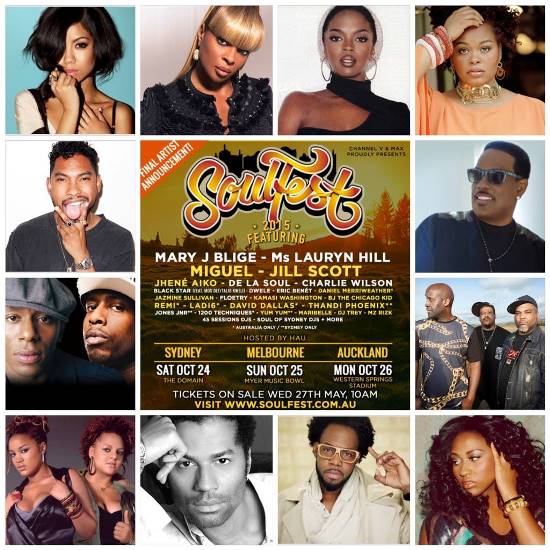 The world's smallest continent is throwing one of the biggest parties of the year. SoulFest -- Australia's first and only neo-soul, jazz and hip hop festival -- is back and bigger than ever with over 20 artists and DJs across two main stages during a 10-hour day. Wondering who will grace the stage? Of course you are, so let's get to it: Mary J. Blige, Jill Scott, Lauryn Hill, Miguel, Jhené Aiko, De La Soul, Black Star (yes, BOTH  Yasiin Bey and Talib Kweli) and Charlie Wilson. But wait, there's more! Recently reunited duo Floetry will also be on hand, as well as Jazmine Sullivan, Eric Benet, native Aussie Daniel Merriweather, BJ the Chicago Kid, Kamasi Washington and Dwele. Hosted by Australian hip hop artist/radio host Hau and featuring a host of DJs, the event will also showcase many local artists such as Thandi Phoenix, Remi and Maribelle. As if this incredible lineup wasn't enough to get you salivating, the festival will also feature a wide selection of cuisines including authentic soul food, pop-up eateries and themed bars curated by catering specialist and event producer Fernando Motti.

Last October, the inaugural SoulFest event launched in Sydney before heading to Brisbane and Melbourne, finally stopping in Auckland, New Zealand. Now in its second year, the festival will follow a similar path, with Sydney (The Domain), Melbourne (The Sidney Myer Music Bowl) and Auckland (Western Springs Stadium) once again hosting main stages on October 24th-26th. Sideshow events in Brisbane and Perth will be announced later this year.

Many festivals of this magnitude force you to choose between multiple artists who are playing at the same time across scattered stages. But SoulFest organizers are promising that "you can see every main stage performance without missing one artist performance." This means 10 hours of uninterrupted eargasmic bliss.

Now, about those tickets. Surely all of this goodness won't come cheap...right? Well, in addition to group discounts, if you can't afford to pay the full ticket price upfront, they are offering payment plans. Yep, you read that correctly -- payment plans for concert tickets. They're also holding a contest where two lucky fans in each city can win a VIP package allowing them a chance to meet the SoulFest artist of their choice in addition to backstage access and side stage viewing privileges. You'll even be allowed to bring a friend with you (now might be a good time to solidify your "BFF" status). Full rules are on the SoulFest Facebook page, but hurry, because the contest ends on June 8th.

Lastly, a portion of the ticket sales proceeds will be donated to World Youth International, an Australian non-profit organization dedicated to "Enhancing quality of life, strengthening communities and reducing poverty through sustainable development projects." We don't know about you, but we're sold. SoulFest 2015 is definitely the place to be! Check out the official commercial below, visit the website for more info, then head over to Spotify (an event sponsor) to get your groove on with this specially curated playlist.