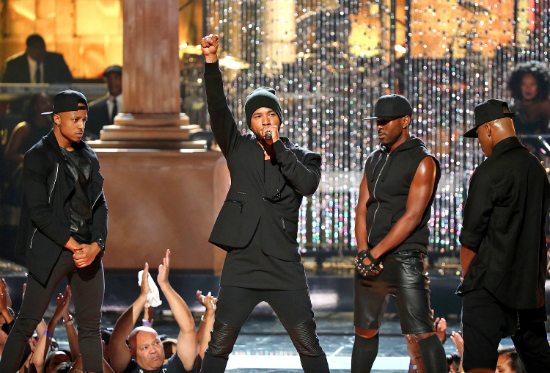 That Empire reign just won’t let up! The biggest show on television couldn’t let a chance to strut their stuff pass by, and the BET Awards were a perfect opportunity to prove that their musical prowess was more than just stunts and shows. Introduced by Terence Howard, AKA Lucious Lyon, Yazz the Greatest (Hakeem) and Jussie Smollet (Jamal) performed a medley of songs from the hit television show.

The performance started with the theme of the show, “No Apologizes.” Yazz stood in the middle of the stage alone before the partition in the background moved to reveal an extra amped up Smollett who came forward to sing the chorus with much attitude.

From there, Serayah (Tiana) joined Yazz onstage for a gripping performance of “Drip Drop.” While the catchy song might make you groan, Yazz and Sereyah’s on-camera chemistry as Takeem is quite apparent on stage. Serayah really didn’t do much but walk around the stage, look sexy and sing on the chorus, but her star power is still evident. Surprise guest Juicy J then strode on stage to join in on the fun. While he is a perfect match for the track, his vulgar yet inaudible verse brought the energy on stage down a bit. Was he trying to censor himself because BET’s technical team was so lax all night? Who knows.

Thankfully, Jussie came back out and lifted the energy in the room with “You’re So Beautiful.” Flanked by four dancers, the star went “up down, up down, up down” and shook it fast. However, Jussie wasn’t just htere to party and BS about the pretty young things in the room. He paused his performance to deliver a moving speech about current events in the country, preaching, “Let the Supreme Court ruling be proof of how far we have come. Let the deaths of our sisters and brothers be proof of how far we have to go. No one is free until we are all free.”  It was actually great to hear an artist, besides Patti LaBelle, talk about some of the social issues going in our country, using the platform for more than promoting their latest project. However, after his speech was over, it was back to business, and Jussie proceeded to break it down like Bobby Brown in the "Every Little Step" video.

Proving that their talent isn’t just smoke and mirrors, all the three cast members did their thing. While it would have been great to get some of the star power from the musical guests on the show such as Jennifer Hudson or Mary J. Blige, Yazz and Jussie more than proved they can hold their own and enthrall an audience.