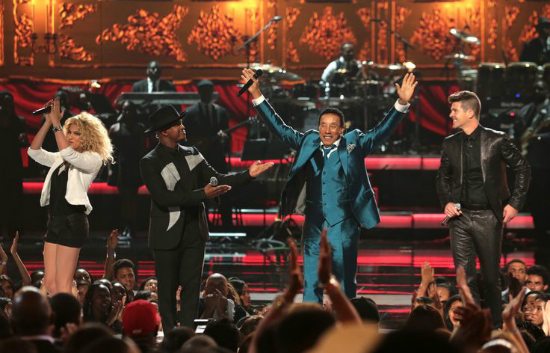 Smokey Robinson was honored at the BET Awards '15 with a Lifetime Achievement Award for his contribution to the Motown sound and some awesome baby-making music. Over the course of his more than 50 years in music, the star has been an inspiration to many. His tribute by some of today's stars and his own performance of a medley of hits proved just how relevant his work is today as it was back in the heyday of Motown.

The tribute began with emerging pop star  Tori Kelly singing "Who's Loving You." While many people on social media weren't aware of the magic and splendor of Ms. Kelly, wondering why they had this white girl no one has heard of doing a tribute, all reservations were silenced as soon as she hit that first note. Tori took the inspiration for her tribute from the Jackson 5 version of the Smokey Robinson hit, paying homage to two different legends. Next, we had blue-eyed soul crooner Robin Thicke singing "Ooo Baby Baby." While Tori Kelly is a tough act to follow, Robin did an adequate job of covering the song, hitting all the high notes and even putting a little bit of his own spin on the song and earning the audience's praise. Finally, Ne-Yo then gave us a spirited performance of "Tears of a Clown," and although he may not have the falsetto of the man he was honoring, he did have the same sense of showmanship and charm.

Of course, Smokey couldn't come to his own tribute without singing some of his own songs, giving us a medley of hits the audience couldn't help but sing along to. The performance began on a somber note with “The Tracks of My Tears,” which had everyone from BET CEO Debra Lee to rising hood star O.T. Genasis standing and swaying in the audience. From there he moved on to “Cruisin,” which you could tell caused a couple “A-ha!” and “Oh! That’s my jam!” moments in the crowd, inspiring husband and wife team Boris Kodjoe and Nicole Ari Parker to start slow dancing in the aisle. Finally, the set ended with the classic, “My Girl,” which had August Alsina and Wale dancing like Cephus and Reesie from In Living Color. Accompanied by Robin Thicke, Tori Kelly, Ne-Yo, the star brought down the house last more time.

While Smokey’s tribute may be remembered more for his long-winded speech/rant about staying humble, it could never overshadow the wonder of his talent. Though Mr. Robinson is no spring chicken and couldn't quite recreate the magic of his recordings, his spirit, sincerity and all the hearts he touched in the audience more than made up for what his voice may not have been able to capture.