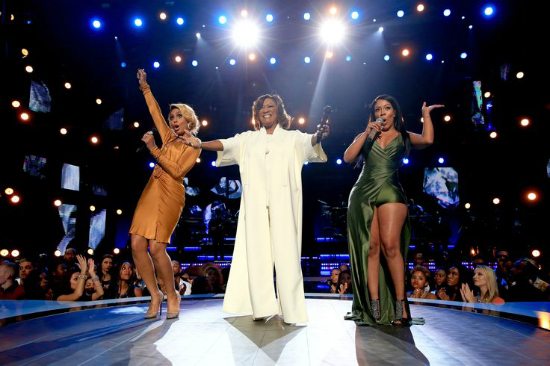 After three years of an all-out social media war, K. Michelle and Tamar Braxton have let their guards down, dropped their weapons and decided to forgive each other. The two soul-singing songstresses took the stage at last night’s BET Awards to make the end of the feud official for the entire world to see and hear. Unfortunately, much of what we heard during this performance wasn’t too great. K. started the rocky showing by performing her latest single, “Hard To Do," and while her stage presence was strong, her vocals were not. To be perfectly honest, her dancers and her overdone rear-end were more noteworthy than the pitchy notes that she sang. Tamar also fell short as she slid through and performed “If I Don’t Have You.” Between her odd facial expressions, makeup choices and unfortunate vocal struggles, Braxton didn’t do her own song justice.

The saving grace of this entire medley came in the form of none other than Patti LaBelle. Tamar briefly (and awkwardly) spoke on her forgiveness towards K. Michelle and then the two launched into LaBelle’s “If Only You Knew,” right before the legendary soul star stormed the stage and stole the show. While Tamar and K. sounded much better singing this classic song, Patti Patti stretched her wings out and soared over the both of them, practically making us forget that they were even on the stage. If nothing else, it was good to see our Auntie Patti looking and sounding good, and it was also nice to see the two younger songbirds end their childish feud. Time will only tell if this moment was genuine or just for attention, especially with K. Michelle already having used her petty powers to stir up drama with SWV’s lead singer Coko on Twitter immediately after the performance.