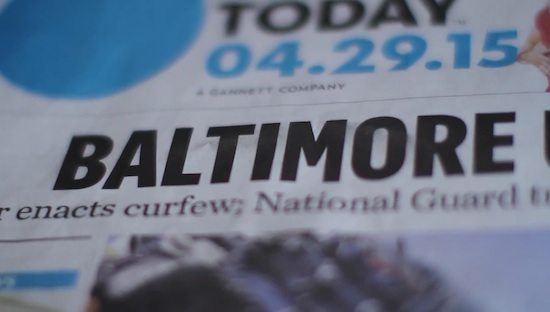 It's been months since the murder of Freddie Gray in police custody and the civil unrest that erupted in Baltimore, Maryland this past April. Since that time, tensions in the city have calmed down with the indictment of the officers involved, but the questionable deaths of African Americans in police custody have not, with the names Sandra Bland and Kindra Chapman being the most recent to become hashtags and leave us with more disgust, more distrust and more questions than answers.

It seems as if some still haven't gotten the memo that Black Lives Matter.

Here to remind everyone is Prince with the lyric video for his song "Baltimore," which he recorded and released as a reaction to Freddie Gray's death as well as Mike Brown and countless others. Directed by Ralston Smith, the lyric video utilizes raw footage of peaceful protests, newspaper clippings and even clips from Prince's RALLY 4 PEACE Concert as the backdrop to the lyrics calling for peace and justice. Prince and Bounce-Worthy star on the rise Eryn Allen Kane voices serve as a musical balm backed by 3RDEYEGIRL. They're all only seen briefly during the video in concert footage; this visual is primarily about the people of Baltimore and how they rallied together after the riots.

The lyric video ends with the following quote from Prince: "The system is broken. It's going to take the young people to fix it this time. We need new ideas, new life..." Yes, new life is needed for the movement, but also to replace all those unjustly lost.