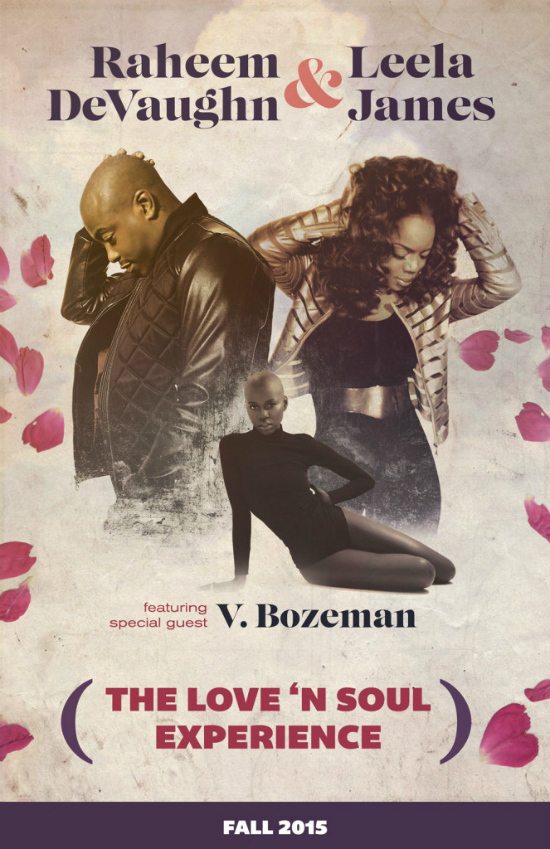 After joining Ledisi on The Initimate Truth Tour earlier this year, Raheem DeVaughn and Leela James have decided to keep the good times and music rolling with the announcement of their joint jaunt, The Love 'N Soul Experience Tour. The soul singers and R&B swingers will kick off this new tour this fall, so while the temperatures are dipping low DeVaughn and James will turn up the heat on stage with their passionate performances. In addition to these two powerhouse performers, singer/actress V. Bozeman will serve as their special guest and opening act.

The Love 'N Soul Experience Tour is scheduled to hit 25 cities starting October 7th in Charleston, SC and wrapping up on November 13th in Los Angeles. In between those dates, the tour will hit Atlanta, Nashville, Chicago, Detroit, Philadelphia, New York City, the DMV and various other locations. Raheem, Leela and V. are going to take the United States by storm and may even need to add more dates and a few international stops to satisfy all of their fans.

Throughout the tour, Raheem's charitable organization, The LoveLife Foundation, will also host their national “Queen for a Day” campaign against domestic violence.

Passionate performers and philanthropic endeavors? Count us in to attend The Love 'N Soul Experience Tour later this year. If you're down like we are, then check out the list of tour dates right here, and make plans to see this can't-miss concert tour when it comes to your city.