The Arizona Jazz Festival Will Be Epic Thanks To The Roots, Erykah Badu, Common, Anthony Hamilton & More 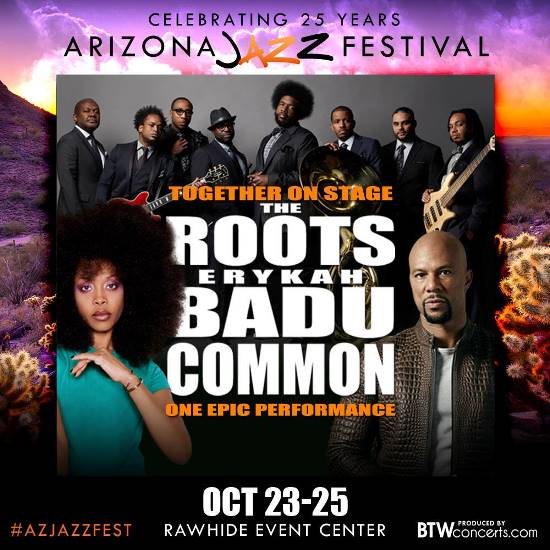 The Phoenix area got a major tourism boost this year when thousands descended upon Glendale for Superbowl XLIX. While music played an integral role in the events (including a Gospel Celebration and the Halftime Show), the main focus was on sports. Well, it looks like a whole new legion of fans will be flocking to the area this October, and this time it's all about the music.

Celebrating 25 years, the Arizona Jazz Festival is bringing the heat with a three-day festival and a roster filled with compelling artists. The silver anniversary will take place October 23rd - 25th just a short drive south of Phoenix at the Rawhide Event Center in Chandler.

The weekend kicks off with some of our favorite R&B crooners. Featured performers include Anthony Hamilton, Kenny 'Babyface' Edmonds, Keith Sweat, Jodeci, Blackstreet with Teddy Riley & Dave Hollister and our boy Eric Roberson. Whether you're into old school, soul or new jack swing, there's a little something for everyone.

The penultimate event on Saturday will feature Ledisi, Mint Condition, Peter White, Euge Groove and Rick Braun. These artists are all worth the price of admission on their own. But we suspect anticipation will be through the roof for the epic headlining performance that will unite The Roots, Erykah Badu and Common on one stage.

Finally, the festival will close on a high note with singers and instrumentalists alike. Maxwell and Toni Braxton are sure to leave a few folks fanning themselves. Daley will bring some soul from across the pond while Kem, Jeffrey Osborne, Elan Trotman and Tim Bowman send us home on a smooth jazz high.

Unlike some festivals that force you to buy multi-day tickets, single-day tickets are also available. But make your move, because those sell-out quickly. Visit the website for additional info and follow the festival on Facebook, Twitter and Instagram for surprise giveaways and a chance to win free tickets.