TOKiMONSTA & Gavin Turek Want You To Visit Their ‘Hemisphere’ 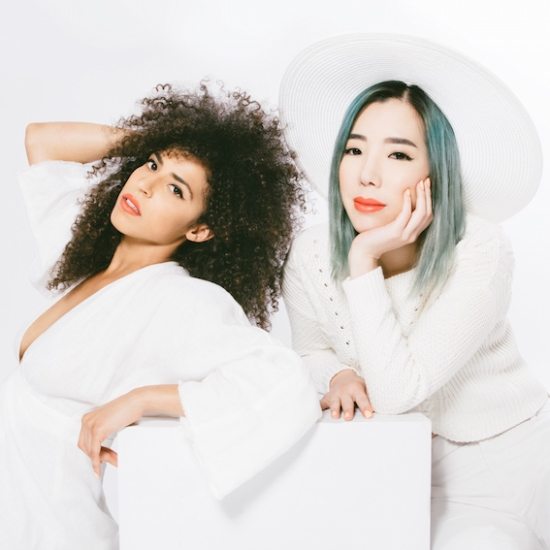 Remixing everyone from Tweet to Jessie Ware, DJ/producer extraordinaire TOKiMONSTA is someone who stays on our radar thanks to her edgy reworks of soulful music. Besides having the distinction of being the first female member of the Brainfeeder collective, the beat-making Los Angeles native recently struck out on her own to create Young Art Records, debuting her 2014 mini-album Desiderium as the label's first release.

As TOKi continues to develop her brand, she recently added Gavin Turek to the emerging Young Art roster. Ms. Turek is a fellow L.A. native and has spent the last few years generating buzz for her disco-inspired sound and entertaining live performances. By the way, if you're wondering why Gavin looks or sounds familiar to you, perhaps you remember her hypnotic moves as the gold-clad, tambourine-shaking backup singer in Tuxedo's "So Good" and "R U Ready" videos. Her vocals are also featured throughout their debut album. Though TOKi and Gavin have collaborated several times in the past, they're breaking new ground for the upcoming mini-album You're Invited, which will be their first "proper" release.

To give us a preview of what's to come, the duo recently premiered "Hemisphere," an ethereal ballad that puts the talents of both artists on full display. Turek, who penned the lyrics a few years ago while she was dealing with "loss and loneliness," says that TOKi "made the emotion I felt truly come to life musically." Gavin takes her time, using her delicate vocals to tell a story of love lost, while TOKi creates an alluring sonic landscape with warm synth and intricate beats.

Take a listen below then check out their recent live performance of the track on Revolt TV. The two have been touring to promote the album with sold out shows in Brooklyn and Miami. Unfortunately, the San Francisco show is also sold out, but L.A. Bouncers can still grab a few remaining spots. Head over to TOKi's website for ticket info as well as dates for her upcoming solo shows. You're Invited is set to drop on August 28th, but "Hemisphere" is available for download right now on iTunes. Be sure to visit SoundCloud for more music from Gavin (including her recent release for IHEARTCOMIX) and TOKiMONSTA.