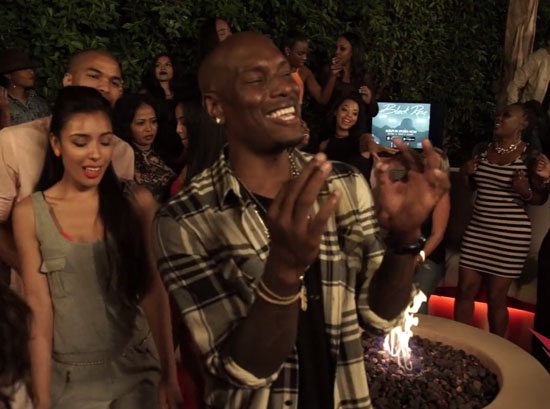 Tyrese recently took to his backyard to give his closest friends an intimate listening experience of his new album Black Rose. The album, with limited features and what he describes as pure R&B, has enough old school vibes to reinstate (if it was ever lost) your love for the genre. The first half of Tyrese's listening experience finds at least 30 of Tyrese's friends (mostly women) sitting around a fire pit as he entertains and explains his singles. The crooner adds a personal touch sharing real anecdotes for each track he plays, being honest about his relationship shenanigans and missing his ex. Directed and edited by Kiarash Behain, executive produced by Tyrese and produced and co-edited by HJ Chong, the 20-minute long video features visuals of his friends having a blast listening to the album, juxtaposed with scenes from his new videos, like "Shame" featuring songstress Jennifer Hudson and directed by Denzel Washington.

The second half of the video features celebrity endorsements from long-time friends Vin Diesel and Larenz Tate. While Vin bought his copy of Black Rose on iTunes, Larenz was present in the studio while Tyrese made the album, saying "thanks for putting the rhythm and blues back in R&B." His most vulnerable and honest album, so he says, Black Rose is Tyrese's last solo album, he proclaims in the video. Watch the Black Rose listening experience now, and let us know if you think Tyrese is breathing life back into R&B with his latest album.