Janelle Monáe & The Wondaland Crew Speak Out With ‘Hell You Talmbout’ 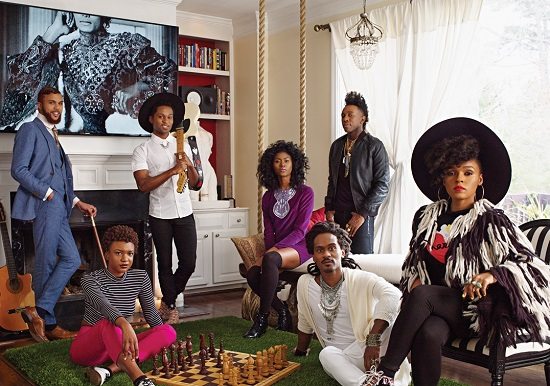 Though they are in the midst of a secret tour and preparing for the release of the compilation EP The Eephus, Janelle Monáe and her Wondaland Records are still making time for activism. The collective marched against police brutality in Philadelphia in advance of their show there and repeated the effort today before they took the stage in New York City. And before you think that this is just some well-timed publicity stunt to promote their upcoming project, they've also put their music where their mouth is.

Janelle, along with Jidenna, Roman GianArthur, St. Beauty, Deep Cotton and George 2.0, has retooled "Hell You Talmbout" — originally a bonus track from Janelle's The Electric Lady — fashioning it into a battle cry to support the Black Lives Matter movement. Eschewing the original's verses and melody, they instead chant over marching band-like percussion as the say the names of the multitude of lives lost at the hands of America's systemic violence against African-Americans. Each person takes turns shouting a series of names, as recent as Sandra Bland, Eric Garner and Mike Brown and going as far back as Emmett Till, making sure that not a single name goes unsaid nor a single life be lost in vain. It's a powerful artistic statement in a time when statements like it are few and far between.

The reimagined song is being offered for free via Wondaland's SoundCloud page, so be sure to grab yourself a copy. But, most importantly, honor the names that are said and the many more that aren't by adding your voice to theirs.