Melanie Fiona Aims For The Heart In ‘Bite The Bullet’ 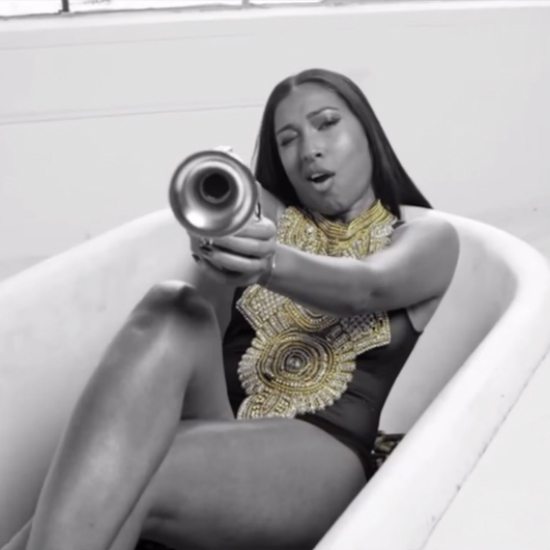 In May, we were treated to the new song “Bite the Bullet” by Toronto songstress and Drake's former band mate Melanie Fiona. The reggae-inspired tune served as a metaphor for dealing with the dangers of falling in love. Now the artist has dropped the video for the jamming love song, a Quentin Tarantino-light visual filled to the brim with weapons and artillery both real and metaphorical.

Directed by Fiona’s manager, Carmen Murray, the black-and-white video finds Melanie embodying the spirit of her reggae alter ego, Syren Hall, dodging bullets in an abandoned building and showing off her banging body in a Michael Costello dress. Unfazed by the dangers associated with love, Melanie gladly bathes in a tub filled with bullets, sings seductively into a gun fashioned into a microphone and rocks out like the queen of the stage she is, proving that her voice, her body and her indomitable spirit are as fierce as any weapon formed against her.

“Bite the Bullet” is the first single from her forthcoming album, Awake, which the artist says is the truest reflection of who she is, chronicling the personal and professional changes she’s experienced over the last few years. After watching Melanie Fiona strut her stuff in this new video, we can't wait to see what else she has in the chamber when her new album drops this fall.