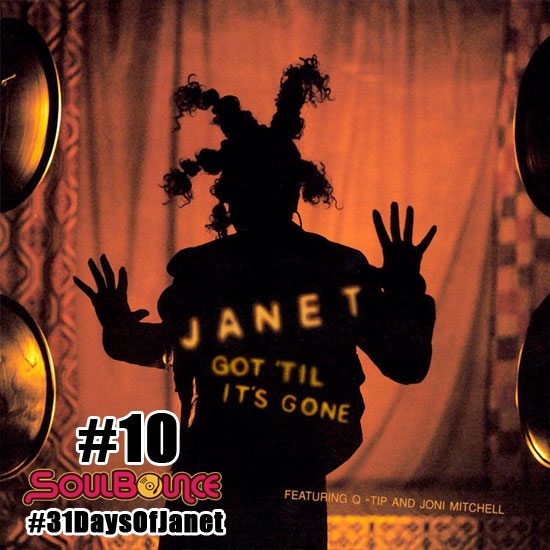 When Janet Jackson first released her sixth studio album, The Velvet Rope, she utilized a filter of introspection and reflection as the concept project's underlying theme. Nowhere was that introspection felt moreso than on the album's lead single, "Got 'Til It's Gone," as we find her lamenting the loss of something after taking it for granted. Produced by Jackson, alongside her frequent collaborators Jimmy Jam and Terry Lewis, and co-written by the trio, in addition to Jackson’s then-husband Rene Elizondo Jr., Joni Mitchell and Q-Tip, the 1997 single found her trading in her mainstream pop sound for a grittier, hip hop-influenced sound. Jackson's feathery vocals buoyantly floated atop the thumping mid-tempo groove of the track.

Despite the fact that "Got 'Til It's Gone" had an official video directed by Mark Romanek, the song received little promotion and was not released as a commercial single, thus making it ineligible for the Billboard Hot 100 chart. This rather inexplicable detail did little to hinder the song's popularity, quickly becoming a hit on urban radio and internationally and appearing on music charts in over 15 countries. It also went on to garner acclaim for its pre-Apartheid South African-influenced visuals, nabbing a GRAMMY Award for Best Short Form Music Video in the process.

If I could turn back the hands of time / Make you, fall in love, in love with me again / So would you give me another chance to love / To love you, love you the right way, no games

Eighteen years after its release, "Got 'Til It's Gone' remains a major turning point on Jackson’s road to self-discovery. As the precursor for other Velvet Rope singles such as "Together Again" and “Go Deep,” the song introduced audiences to both a sexually adventurous and emotionally vulnerable Janet who admitted to battling depression, body dysmorphia and eating disorders. Her decision to funnel her traumatic personal struggles into the project paid off, with The Velvet Rope quickly being certified triple platinum, proving that when it comes to Janet Jackson, taking risks can pay off.