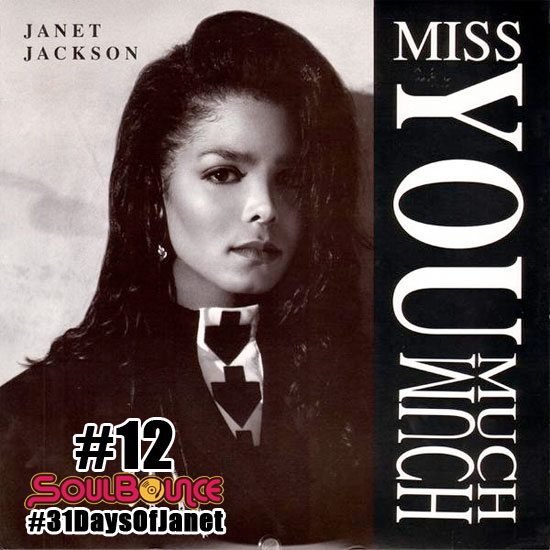 After kicking in the door with her multi-platinum hit album Control, how did Janet Jackson decide to follow it up? By releasing an even bigger blockbuster for her fourth album, Janet Jackson's Rhythm Nation 1814, led by one of her biggest singles, "Miss You Much." Emboldened by Control's runaway success and its curve-setting sound, Jackson linked back up with Jimmy Jam and Terry Lewis and took even more creative control with Rhythm Nation, a concept album that overall addressed societal issues of the late 1980s. But the heaviness of the album's theme was tempered by fun and flirty songs such as the lead single.

"Miss You Much" found Janet Jackson waxing romantic about her man who has her wide open, and she misses him something crazy whenever they're apart. She plays it coy but she is smitten and wants everybody and their mama to know.

Send it in a letter, baby / Tell you on the phone / I'm not the kinda girl who likes to be alone

The Jam and Lewis production was heavy on percussion and synths and sounded like the natural evolution from the music on Control as the '80s gave way to a new decade. "Miss You Much" was a hit in every sense of the word, going on to become Janet's biggest selling single of her career at that time, hitting No. 1 on the Billboard Hot 100 for four weeks, being nominated for two GRAMMY Awards and winning two American Music Awards.

Not only was the song a hit, but so was the music video, which kicked off with Janet's dancers playing pool and having tea time discussing her business. Janet walks into the room smiling like a woman in love and her dancer friends question where she's been. She answers them in song and dance, and they all join her in doing some iconic choreography created by Anthony Thomas. The black-and-white video directed by Dominic Sena was part of the Rhythm Nation 1814 film, which expanded on the album's story and featured additional videos.

Chart domination and accolades aside, "Miss You Much" is a bona fide favorite among Janet fans. It's also how we feel about Janet and why we're ecstatic about her return.