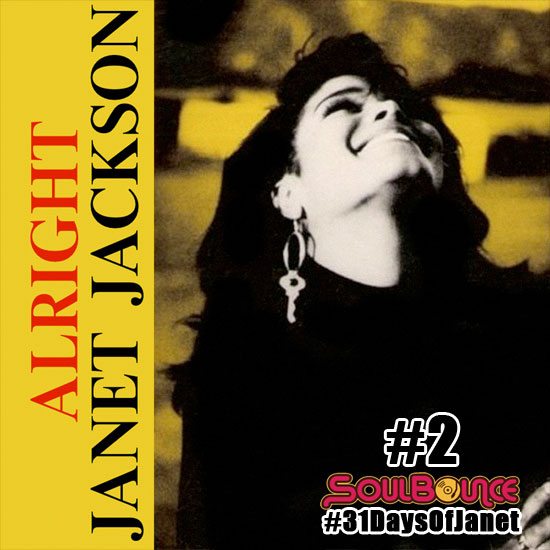 As the '80s drew to a close, Janet Jackson was once again on top of the charts thanks to her fourth studio release, Janet Jackson's Rhythm Nation 1814. After a three-year recording hiatus, Miss Jackson had a lot to say and delivered a declarative opus driven by socio-political themes. Current affairs weren't her sole focus, however. The lengthy album was a well-rounded project, replete with ballads, feel-good tunes and dance grooves. After ending the first half of the record with the poignantly somber "Livin' In A World (They Didn't Make)," producers Jimmy Jam and Terry Lewis needed to lighten the mood and had just the song to do it.

"Alright" was a celebratory ode to friendship and love, not to mention a foolproof segue to the latter half of the album, which included hits like "Escapade" and "Black Cat." Shrewdly building on a classic sample from Lyn Collins' "Think About It," Jam and Lewis once again proved their mettle, creating a sonically complex stew flavored with new jack swing, hip hop, funk, pop and soul. Musically, there's a lot going on here. Yet, when Janet sings, you can't help but be transfixed by the ebullient urgency in her voice. In both her lower register and higher octaves, her happiness is contagious and we can't help but smile and sing along.

As with other videos from the classic album, the song's visuals (directed by Julien Temple) were like nothing we'd ever seen before. Highlighted by memorable cameos from Cab Calloway, The Nicholas Brothers and Cyd Charisse, the video was a tribute to the musicals of the '30s and '50s featuring exaggerated colors, impressive choreography and unforgettable costumes. As if that wasn't enough, a bounce-worthy remix featuring Heavy D only made us fall deeper in love with the song. The industry took notice as well, bestowing multiple award nominations while the song became Janet's fourth consecutive Rhythm Nation single to top the dance charts.