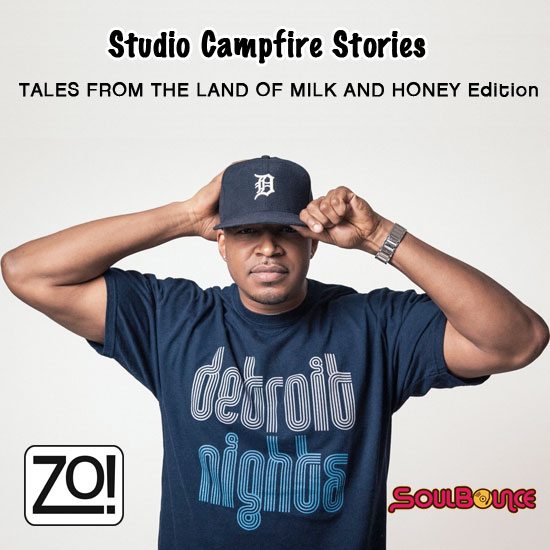 Let me just start this story off with this fact: "Milk and Honey" was the very first song that Nicolay and I created when we got together in February 2014 at his studio in Wilmington, NC. The FIRST jam. When I say that any and all doubts he and I may have had about working with another producer were thrown outta the window after this one. Trust me. To me, hearing how this song came together was clear and uncut proof that this collaborative production was supposed to happen.

Scheduled studio time was to begin on February 10, 2014. It was cold as shit outside, but the precipitation held off fairly well for my drive down from Silver Spring, MD to Wilmington. I had never driven that six-hour stretch before as the only cities I had driven to in NC previously were Raleigh, Durham and Charlotte, which is also a six-hour drive, but to the west of I-95; taking the drive east off of I-95 South was new. I loaded my car up with a few weapons: The Nord Lead 2, Moog Little Phatty and my 5-string bass guitar. Although it was only the three studio items, I remember it feeling like I was loading up to play a damn show somewhere. Regardless, once I arrived the set-up process was a quick one. I took a quick look at everything Nic had in the studio and I can remember pretty much getting right to work. The Fender Rhodes piano was powered up and ready to go, so I started messing around on it and came up with a chord progression. JUST from that progression, Nicolay started constructing these Brazilian jazz-influenced drums around what I was playing that had me buggin' out! Once again, y'all, this was the FIRST thing we started working on and I was already thinking, "This is about to be something SPECIAL." This was also the first time I had gotten to see Nic program his drums, which was something short of phenomenal in and of itself, all the way down to the breaks and drum fills. DOPE. From there I can remember coming up with a change and then the melody line that led back into the main groove and then recording the different parts (seeing Nic program the drums around that line was NUTS). Over the drums, we recorded my chords first via the Rhodes and went all the way through the song, no looping, no flying parts -- we just played it straight through. Same with the synth bass, which I played on that trusty Moog Little Phatty straight through. That part was FUUUUUUN to play. It was an extremely loose and free bassline that I wanted to kind of directly complement the movement of Nic's drums while also serving as the glue between them and the Rhodes parts that at the time seemed to be floating freely. When the string and flute parts were laid, we had a solid enough foundation to send off to Phonte.